UC Berkeley scientists are using holographic lasers to edit brain activity and unlock the language of the mind.

Inside the brain, nearly 100 billion neurons simultaneously fire 20 trillion synapses (signals) every second - comparable to a 1 trillion bit per second processor. Each neuron branches out and connects to other cells, sometimes forming upwards of 10,000 connections. Each synapse also represents a different aspect of life - be it a smell, feeling, sound, sight, or otherwise. Together they dictate every action, thought, and memory within the mind. As a whole, it comes together as consciousness.

But what if we could edit the activity within our brain? UC Berkeley neuroscientists are honing in on the technology which will one day make the long-lived sci-fi fable of programming human brains a reality. Currently, the team is developing a technique using holographic laser projections to project data directly into a brain - and it has already proven to be successful.

In a recent paper called Precise multimodal optical control of neural ensemble activity, a team of UC Berkeley scientists developed a holographic system which can artificially create brain activity. The system has been used to stimulate different regions within the brain of a mouse to control its various senses. The team hopes to one day use the technology to develop neural prosthetics capable of reproducing any of the bodies senses - hearing, taste, touch, smell, or sight.

In this video, the activity of three layers of somatosensory cortex of a mouse’s brain is recorded. Organic activity appears as fluoresce green while neurons activated with the holographic laser light up as a purple arrow. The demonstration shows how real brain activity was stimulated which induced false sensations.

Although complex in nature, the brain relies on a few fundamental processes to send, receive, and store data and instructions. Special cells within the nervous system send and receive electrochemical signals throughout the body to report back on the surroundings. Inside the brain, certain regions are responsible for distributing each sensory input to the correct areas. It is in these regions which scientists are interested - the ability to control such regions would enable scientists to program each of the five basic senses.

Taking control over parts of the brain's activity requires millisecond precision in a three-dimensional space to target and stimulate neurons. It is a difficult task, and it needs to be done in such a way that produces artificial brain activity. Not only do the individual neurons have to be individually tracked, targeted and stimulated, but they also have to be stimulated in a way which mimics organic brain activity.

Despite requiring seemingly impossible precision, a few of the scientists responsible for the recent advancements in brain editing technology published a paper in late 2017 outlining a new technology which can simultaneously stimulate and control multiple neurons in a three-dimensional chunk of brain tissue. In late April 2018, the team published an additional paper which improved upon their previous design. Now, the team can stimulate, suppress, and record brain activity in real-time.

By themselves, neurons do not react in the presence of light. Having a system which can target and track individual neurons with light is neat, but completely useless when attempting to induce brain activity. 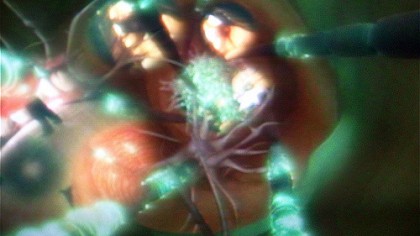 To get around this limitation, scientists attached photo-sensitive microbial opsins to a region of neurons near the surface of a brain.

Essentially, the opsins are proteins which react in the presence of light. If struck by a flash of light when attached to a neuron, it momentarily causes a localized spike in brain activity. However, the artificial stimulation seems to influence the activity of other neurons in the surrounding area.

Previous technologies involving photo-stimulating opsins typically operated in two-dimension. The techniques were not only limited in range, but they were also rather imprecise. Previous holographic projecting techniques would cause opsins to unintentionally stimulate multiple neurons at once. The results were intriguing but were not accurate enough to induce useful brain activity.

In this picture, diagrams display previous optogenetics (using light to stimulate living tissue) are used. On the left, receptors interlaced with opsin are activated with different light sources to stimulate different responses. In the middle, a virus containing an opsin gene is shown. The virus produces and delivers the opsin to the brain. On the far right, a mouse is shown with a light source entering its head. It is through this small window where light is directed into the brain so it can be manipulated.

Now, in their most recent work, the UC Berkeley team of scientists engineered an entirely new approach involving a new protein which can individually stimulate neurons. Their new holographic system also enables them to control individual neurons in a thin, yet still three-dimensional region of the brain.

The technology is not entirely new, but it is a successful combination of a series of other work brought together to create one of the most accurate brain-stimulating devices which can accurately edit brain activity.

With the device attached to a mouse, the scientist could replicate a similar pattern to an organic sensory stimulus.

According to Berkeley, “The researchers have already tested the prototype in the touch, vision and motor areas of the brains of mice as they walk on a treadmill with their heads immobilized. While they have not noted any behavior changes in the mice when their brain is stimulated, Mardinly said that their brain activity — which is measured in real-time with two-photon imaging of calcium levels in the neurons — shows patterns similar to a response to a sensory stimulus.”

Manipulating the cells requires a computer system to determine where each of the thousands of protein-covered neurons are. For a brief moment, a set of neurons are targeted and struck with a holographic laser. With this technique, they were able to precisely “photo-stimulate” as many as 50 neurons at once in a small region of brain matter containing several thousand other neurons. The task is then repeated 300 times every second while stimulating a new set of 50 neurons with every pass.

A Closer Look at Holograms - and the Brain

Focusing the light on a cell smaller than the width of a human hair requires absolute precision - Precision which can only be obtained using a holographic image.

The holographic projector involves bending and focussing two laser beams in a way which forms a three-dimensional spatial pattern. In practice, the holograms appear as if they were a 3D image floating in space.

In the case of the recent advancement in brain editing technology, the holographic image pattern was used light up a thin layer of brain tissue at the surface of the cortex measuring about a tenth of a millimeter thick. Individual disk-shaped light orbs created by the holographic projector are precisely projected onto the opsin covered cells.

In this picture, brain activity is recorded through the holographic laser device.

“The major advance is the ability to control neurons precisely in space and time,” said postdoc Nicolas Pégard, author of the paper who works both in Adesnik’s lab and the lab of co-author Laura Waller. “In other words, to shoot the very specific sets of neurons you want to activate and do it at the characteristic scale and the speed at which they normally work.”

What Brain Editing can do for Humans

The goal right now is to read brain activity in real-time. Then, based on the brain activity measured, a system could determine which sets of neurons to activate to replicate an actual brain response. The researchers hope to increase the capacity from activating just a few dozen neurons at a time to activating an impressive few thousand neurons at a time. If successful, the team may be able to return lost sensations to humans. All senses could be then be reprogrammed and actively replicated with a holographic projection device - one which scientists hope will fit inside a backpack.

So far the research is helping scientists map the activity of a brain in real time. Perhaps more importantly, though, the research is unearthing the inner mechanisms behind the language of the mind. They hope their research will help in the development of neural prosthetics - effectively, a brain implant which can artificially communicate with the brain and assist it using their holographic device.

“This has great potential for neural prostheses, since it has the precision needed for the brain to interpret the pattern of activation. If you can read and write the language of the brain, you can speak to it in its own language and it can interpret the message much better,” said Alan Mardinly, a postdoctoral fellow in the UC Berkeley lab of Hillel Adesnik.

Their research includes successfully using their technology to stimulate false sensations in the regions of the brain which control sight. While the mouse reacted to the input, it did not appear to change its cognitive ability, although this will be an area of focus in upcoming research.

As of yet, the intricacies of the human mind remain too complex for such a device to replace or even assist the brain. Although it is not ready for human trials, the technology behind exactly how the researchers programmed a brain remains fascinating.

The Future Potential of Brain Editing

Communicating to the brain with brainwaves will completely change the way in which humans live. Old memories lost to time could be re-experienced as if it had literally been yesterday. Such a system could also assist with neural prosthetics to regain any senses or assist the brain with day-to-day function. The ability to program a brain also carries the possibility of being able to remove memories altogether.

Brain editing using holograms is already a real thing. Of course, scientists will still need to heavily research the technology before human trials are approved - assuming the public is willing to accept such profound research as moral and just.