Researchers believe that carbon capture technology will be a necessity against global warming by 2030.

Scientists estimate that large-scale projects to actually suck carbon dioxide out of the atmosphere will be needed by the 2030s to prevent further climate change.

Most new technologies to obtain and store harmful carbon emissions are still in the early stages of development.

“I don’t think we can have confidence that anything else can do this,” the Berlin-based chief executive told a London climate change conference, as reported by The Guardian.

There are those who argue that Carbon-sucking technologies have the potential to hold the planet’s warming at bay, perhaps even keep it at two degrees of warming.

“It’s something you don’t want to talk about very much, but it’s an unaccountable truth: we will need geoengineering by the mid-2030s to have a chance at the [1.5C] goal,” Hare said, referring to efforts to cool the planet through engineering.

How would they do this exactly? Ideas include planting carbon-absorbing forests across large areas, then harvesting the wood for energy and pumping the negative emissions produced underground. This technology is known as Beccs, or bioenergy with carbon capture storage. 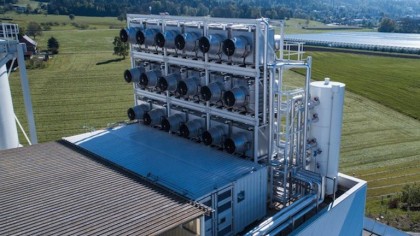 Beccs is “probably essential to take us to zero emissions” although “it’s really difficult to imagine we can use land at the levels required in the models,” said Corinne Le Quéré, director of the Tyndall Centre for Climate Change Research at the University of East Anglia to The Guardian.

Creating machines to literally suck the carbon dioxide directly from the air are also a consideration. A giant new machine in Switzerland is doing just that. It is the world’s first plant to capture carbon dioxide directly from the air and sell it to a buyer. The Climeworks AG facility near Zurich can obtain about 900 tons of CO2 annually, the equivalent of emissions released from 200 cars. The plan is to pipe the gas to grow vegetables.

“Highly scalable negative emission technologies are crucial if we are to stay below the 2-degree target [for global temperature rise] of the international community," said Christoph Gebald, co-founder and managing director of Climeworks to Science Magazine.

The company hopes to capture 1 percent of the world’s global CO2 emissions, but to do so, they would need to build 250,000 more plants.

Air capture technology is still in its early stages and has garnered its share of naysayers, Massachusetts Institute of Technology senior research engineer Howard Herzog called the process a “sideshow.” Claiming that its much cheaper to capture carbon emissions directly from the source, being fossil fuel plants.

Via: The Guardian, Science Magazine.