New findings of a promising study involving robots made from DNA were published today. The study represents another important contribution to the field of nanotechnology.

Nanotechnology—the study of tiny structures ranging from 0.1 to 100nm—is still in its infancy, but that doesn’t stop researchers from striving hard to make new discoveries in the area. One such team of researchers from the California Institute of Technology, under the leadership of head researchers Anupama Thubagere and Lulu Qian, has put together robots using DNA. The findings from the study titled “A cargo-sorting DNA robot” will be published in today’s Science journal.

The robots were then programmed to do three very specific tasks: walk along a platform which had been set up, find a molecule cargo (a two-dimensional origami self-folding DNA test platform), and then deliver this cargo to a specified location. Scientists were also checking to see if the robots could perform this task collectively. Incidentally, the robots—each built from a DNA molecule of the single-strand variety which consisted of only 53 nucleotides— stood at an unfathomably small height of just 20 nanometers and each step covered a distance of only six nanometers. 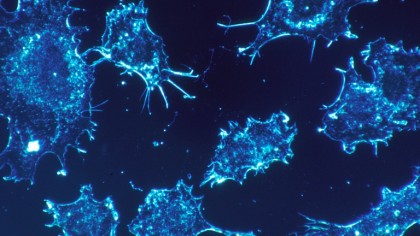 Fluorescent dyes, two specifically, were used by the scientists to assist the robots in making a distinction between the targets. On the way that the robots function, study co-author Qian explains: “You might think that the robot is not smart. But here is a key principle for building molecular machines: make individual molecules as simple as possible so they could function reliably in a complex biochemical environment, but take advantage of what a collection of molecules can do, where the smarts are distributed into different molecules.”

The results were 80% successful, which is very promising for the team, although they acknowledge that more work needs to be done to increase accuracy. Study co-author Thubagere explains the crux of the study more clearly: “We successfully programmed complex behavior in DNA robots and compartmentalized each task using DNA origami.”

An Unlimited Future for Nanotechnology

As the name implies, due to the small size of the robots created using nanotechnology, with more research performed on the medical applications of its use, the potential for transporting molecules to cells and other inaccessible or not easily accessible areas of body could be endless. Although the three main areas of nanotechnology is being developed are somewhat divergent—medicine, the environment and industry— scientists working in the field understand the relevance that any discoveries in the field can have.

On the future outlook of research and development in the field of nanotechnology, co-researcher Qian said: “The biggest implication that I hope the work will have is to inspire more researchers to develop modular, collective, and adaptive DNA robots for a diverse range of tasks, to truly understand the engineering principles for building artificial molecular machines, and make them as easily programmable as macroscopic robots.”