Scientists Capture 25,000 Dice Ordering Themselves Perfectly in a Cylinder

Scientists are testing compaction dynamics on non-spherical objects. The applications could be applied to space travel.

What made this experiment so interesting is that granular materials are usually closer to spherical objects, cubes can be a significant challenge. Curious about what would happen to a granular material consisted of cubes, a team of physicists from Mexico and Spain decided to use the object that is part of almost every board game, dice: 25,000 to be exact. They were standard dice with six sides, half a centimeter wide on each side.

To begin the experiment, the teams poured 25,000 dice into a translucent cylinder. The cylinder was 8.7 cm wide and was twisted back and forth, once per second. As the cylinder began to do the "twist," the dancing dice began to pack closer together through each twist. Rather than move chaotically like other particles, the dice came together somewhat systematically, and it was hypnotizing.

Like a mobile bullseye, the dice positioned themselves into tidy concentric rings after approximately 300,000 twists. To push the experiment even further, the excited scientists tested various velocities and intensities only to discover that the faster the cylinder was moving, the quicker the dice would fall into place. Intuitively, if you were to move the cylinder very slowly, the dice could take forever to fall into place.

So, Why Did it Work?

The flat surfaces on the six dice will eventually align with each other because of the force generated as the twists pushes them outwards to the edge of the cylinder. 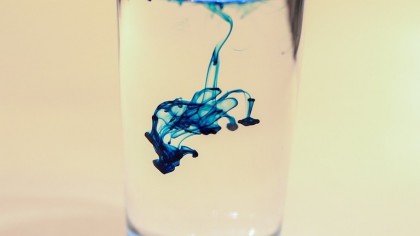 "Under this agitation, the development of shear forces among the different layers of cubes leads to particle alignment." writes the team. "If the intensity of the excitations is sufficiently large, an ordered final state is reached where the volume fraction is the densest possible compatible with the boundary condition."

This experiment is a great move in the right direction towards working with materials in places where gravity assist will not work from tapping a container. After this exciting phenomenon was observed in the experiment, the Mexican and Spanish teams are preparing to test other granular materials in the future. According to the Physical Review Letters, the team will be completing the next experiments on the International Space Station aiming to study how microgravity will impact granular materials. What materials should they test next?