The important results of an experiment involving the Large Hardon Collider (LHC) by a team of MIT physicists were shared last week, and the scientists are hopeful that more scientists in the field of particle physics will be encourage to share their work.

Last week, a team of physicists from MIT released an article titled Exposing the QCD splitting function with CMS open data in Physical Letters Review. It was made possible through open data released by the European Organization for Nuclear Research (CERN) in 2014 from its round of Large Hadron Collider (LHC) experiments. Compact Muon Solenoid (CMS) data related to one of the main detectors found in the LHC was used to elaborate on a feature of high-energy particle collision.

The experiments showed that at the moment protons collide with one another at very high speeds, streams of quarks and gluons are released. The research verified a hypothesis on whether the patterns of these streams, as well as the energy of particles resulting from the proton collision, can be predicted with the same formula. 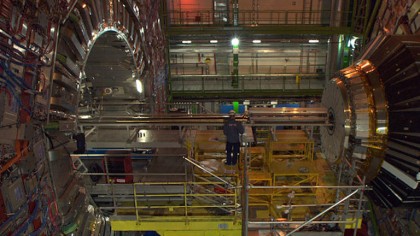 The main significance of the study is that it was only made possible by CERN’s Open Data portal: through this portal, LHC experiments are made available, eliminating the need for a particle accelerator. Moreover, the findings of a particle collider experiment had never been released to the public before this portal came into existence. As results are impacted by a three-year embargo, this is the first experiment that has benefited directly from data released on the time-sensitive portal. CERN even offers a virtual tour of its facility on its website.

The truth is that, due to a number of factors, physicists may feel a graver responsibility in terms of sharing their work. The field has a number of diverse and often unseen applications: energy production, medicine, materials, and climatology, among many others.

That, combined with the economic impact of its application, can mean that the dilemma for physicists of whether or not to share one’s ideas, or the results of an experiment, becomes more difficult. What’s more, the public, as well as important industry people, are often unaware of the various branches of physics and their interrelatedness.

This paper could have an important impact on whether other physicists will come forward and make their information public. Project scientist Jesse Thaler said of the issue of information sharing in the physics field:

"In our field of particle physics, there isn't the tradition of making data public. To actually get data publicly with no other restrictions—that's unprecedented." The focus on sharing information with the goal of creating and accessing open data, as opposed to strictly providing details about a new discovery, is also a motivation for the scientists:

“This is revolutionary because there's been a reluctance in particle physics to make information available publicly...Our work here shows that we can understand in general how to use this open data, that it has scientific value, and that this can be a stepping stone to future analysis of more exotic possibilities."