Growing a combination of algae species for use in bio-oil results may be the key to scaling the industry.

A group of Michigan-based scientists have confirmed that biodiversity is key to improving the performance of algal biofuel systems. University of Michigan researchers experimented by growing various combinations of freshwater algal species in 80 artificial ponds at the university’s research facility at George Reserve.

The study is the first large-scale experiment to examine what role biodiversity has in algal biofuel stability. At the conclusion of the experiment, the researchers found that a diverse mix of algal species performed better than any single species.

However, they found that diversity didn’t necessarily result in more algal mass or biomass, and that in most cases monoculture produced larger biomass results.

"The results are key for the design of sustainable biofuel systems because they show that while a monoculture may be the optimal choice for maximizing short-term algae production, polycultures offer a more stable crop over longer periods of time," said study lead author Casey Godwin, a postdoctoral research fellow at U-M's School for Environment and Sustainability.

Biocrude oil, derived from algae is considered a good potential alternative to fossil fuels. Algae is quick to grow and relatively easily converted to bio-oil. In many cases, algae have the potential to produce more fuel from less surface area than other biofuel crops like corn.

However, scientists have faced many technical challenges in the push towards creating a stable algae source. Growing the microscopic algae on a large scale in outdoor ponds has been hampered by the invasion of pest species of algae as well as fluctuating weather conditions and threats to population from animals and disease.

These challenges have slowed the development of true commercial-scale cultivation. However, decades of research has proven again and again that ecosystems rich in biodiversity are healthier, more resilient and more fertile.

The theory that the biodiversity rule would apply to algae production had long persisted in the industry but no serious scientific research was able to be undertaken until now. The University of Michigan was supported by funding from the National Science Foundation to begin the research into diverse algae community behaviors.

The research was undertaken in two parts, first, six common types of algae use to produce biofuel were grown in various combinations in aquariums in the basement of the university’s science facilities. The four strongest algae species and algal combinations were then grown outdoors inside 290-gallon cattle tanks at the 1,300-acre U-M reserve.

In both phases of the research, the scientists converted the algae into combustible fuel or bio-oil using a process called hydrothermal liquefaction. Bio-oil can be refined to make transportation fuels like biodiesel.

"First we evaluated different combinations of algae in the lab, and then we brought the best ones out to nature, where they were exposed to fluctuating weather conditions, pests, disease and all the other factors that have plagued algae-based fuel research efforts for 40 years," Godwin said.

Biodiversity wins but with tradeoffs

During the 10-week study in the Summer of 2016 the researchers compared the ability of the algae and the algal combinations to do several jobs at once: ‘to grow lots of algal biomass, to yield high-quality biocrude, to remain stable through time, to resist population crashes and to repel invasions by unwanted algal species.’ 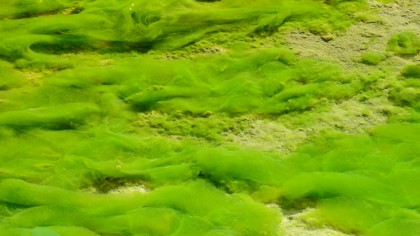 "Our findings suggest there is a fundamental tradeoff when growing algal biofuel," said Cardinale, a professor at the U-M School for Environment and Sustainability. "You can grow single-species crops that produce large amounts of biomass but are unstable and produce less biocrude. Or, if you are willing to give up some yield, you can use mixtures of species to produce a biofuel system that is more stable through time, more resistant to pest species, and which yields more biocrude oil."

The full results of the study have been published in the journal Global Change Biology-Bioenergy.