The new glass made from metal-organic compounds is more flexible and outperforms 50 other types of existing glasses in forming ability.

Researchers at Pennsylvania State University have found a new class of glass made out of metal and organic compounds. This new glass has better mechanical and optical features when compared to more than 50 different types of conventional glasses.

The scientists have named their research ZIF-62. The new type of glass has the same atomic structure as normal glass, which is formed around Zinc atoms instead of Silicon atoms.

The new glass is formed more quickly and is much more flexible than a normal glass. The glass is a liquid present as pseudo-solid at normal temperatures. It is usually created by superheating raw materials and supercooling them down so that they form an amorphous structure that is not uniform throughout the solid.

The research team at Penn state claim that ZIF-62 has surpassed the GFA of many existing glass materials. Unlike the conventional silica glass having silicon at the center and inorganic compounds surrounding it, the new glass has a zinc atom surrounded by two organic compounds, benzimidazolate and imidazolate to create a metal-organic Framework (MOF).

Researchers also found out that increasing the quantity of benzimidazolate, increased its GFA further.

The metal-organic framework is the basis for new glass materials like ZIF-62. Scientists have noticed that the MOF adds a more quantifiable number to the glass-forming ability index.

Glass-forming ability index is the ratio between the glass-transition (different from freezing transition) temperature and melting temperature. It is used to identify the best raw materials to create glass. 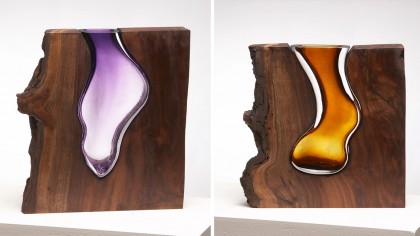 Scientists have been able to verify that ZIF-62 has a very high viscosity index compared to other glasses (inorganic, organic or metallic). Due to its higher flexibility, the new metal-organic framework glass might be a better alternative to use in fiber optics cable for high-speed internet and other various applications such as shatter-proof windows or flexible touchscreen technology.

However, there are still some production issues. They need to be synthesized first. The organic compounds require a solvent called N,N’-dimethylformamide to dissolve and needs to be mixed with hydrous zinc nitrate. After the preparation of the solution, it needs to be heated around 427°C(700 K) for a long period of time and the temperature should not rise more than 527°C(800 K) or else the raw material starts to volatilize and become vapors.

The research team is in the process of finding a cost-effective and scalable way for commercial production of the new glass. Until now, they have only analyzed the mechanical and optical features of the new glass.

"This family of glasses is so new that, while we have determined its glass-forming ability and a few other properties, we have not fully characterized all of its material properties," said John C. Mauro, co-author of a study. "There also needs to be research into how to scale-up this process for manufacturing."

The success of the zinc-based glass has encouraged the researchers to work with cobalt-based and other different glasses.