Scientists have created a new stable state of matter in the form of a supercrystal using ultrafast pulses of laser light.

Scientists have discovered a new state of matter created by ultrafast bursts of light that is stable at room temperature by frustrating the material's natural tendency to return to a ground state.

Scientists at Penn State, Argonne National Laboratory, and others have created a new, stable state of matter using controlled pulses of laser light.

"We are looking for hidden states of matter by taking the matter out of its comfortable state, which we call the ground state," said Venkatraman Gopalan, the Penn State team leader and professor of materials science.

"We do this by exciting the electrons into a higher state using a photon, and then watching as the material falls back to its normal state. The idea is that in the excited state, or in a state it passes through for the blink of an eye on the way to the ground state, we will find properties that we would desire to have, such as new forms of polar, magnetic and electronic states."

They accomplish this using a two-stage laser, one to excite the electrons into a higher state, and a second one to record the data about the state of the material.

Normally, as Gopalan said, these states of matter are transient, existing for only a fraction of a second before returning to their ground state. To stabilize these new states so the material properties could be exploited, this return to the natural ground state needs to be prevented. 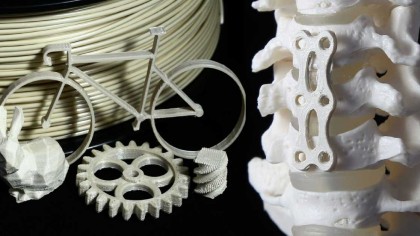 By creating an intricate 3D material made up of alternating layers of Lead titanate and Strontium titanate, the researchers were able to create a system that “frustrated” the natural tendency for the materials to return to their ground state, allowing the new state to remain stable at room temperature for over a year.

"For the first time, we observed that a single ultrafast laser pulse irradiation of artificially layered polar material can induce long-range structural perfection when starting from relative disorder," said the research team from Argonne National Laboratory. "This experimental demonstration has already stimulated theoretical developments and has important implications toward future realization of artificial nanomaterials that are not achievable by traditional fabrication."

The research was published in the journal Nature Materials.

Physicist Creates Fifth State of Matter From Her Home