Scientists Develop a Concrete Roof That Generates and Stores Energy

A Switzerland-based team has successfully designed and erected a prototype for a concrete roof structure that generates solar energy, the first step in a series of similar projects.

A team of researchers in Switzerland have come up with a unique type of molded concrete roofing that can generate solar energy. The genius of the design is that it uses a material not generally associated with solar panels or solar technology.

The prototype was created by researchers at ETH Zurich, a prominent design and technology university. The thinking behind the project was to create a structure which could produce energy at a faster rate than it was being expended.

This shell is actually part of larger space: an apartment building called HiLo which is scheduled for construction next year. HiLo will be part of the NEST (Next Evolution in Sustainable Building Technologies) structure, which comprises the Empa and Eawag buildings in Dübendorf (the of the Swiss Federal Laboratories for Materials Science and Technology and the Swiss Federal Institute of Aquatic Science and Technology are housed there).

The large structure, designed as “…the dress rehearsal for the construction of the roof of the NEST HiLo project,” features a pair of shell rooves that are both designed to be self-supporting.

A further look reveals how the layers function together to generate energy:

The first, inner concrete layer is covered by insulation as well as temperature-regulating coils. The thin, second concrete layer houses the thin-film layer of photovoltaic cells. The structure is 7.5 meters high and covers a 160 m2 surface area. The tapering concrete layers range in thicknesses between only 3cm and 12cm, from the roof edge to the supporting structure.

The team opted for a steel cable net structure, instead of timber or foam, in order to allow greater flexibility with new design experimentation as well as to have a cheaper materials alternative. In light of this, the structure has already been quickly disassembled, and more similar experiments are in the works.

Algorithm technology was used to guarantee proper force distribution between the cables and complete roof structure. Another exciting aspect to the project was the collaboration between from Bürgin Creations and Marti. They were given the task of creating a sprayable concrete mix that could cover all the surfaces, yet could remain relatively fluid. Relatively lightweight, the combined weight of the skeleton structure is only 800kg, which includes the cable net and textiles: this modest amount was able to successfully support 20 tons of concrete.

Block expressed his happiness with the success of the prototype, which took six months to construct: 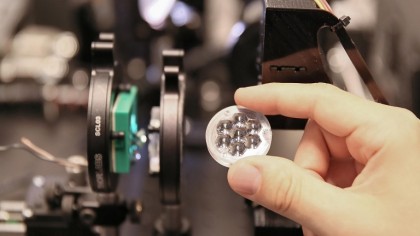 “We’ve shown that it’s possible to build an exciting, thin concrete shell structure using a lightweight, flexible formwork, thus demonstrating that complex concrete structures can be formed without wasting large amounts of material for their construction...Because we developed the system and built the prototype step by step with our partners from industry, we now know that our approach will work at the NEST construction site.”