Scientists Develop AI-Enabled Drones That Can Detect Violence in Crowds

New unmanned aerial vehicles that can use AI to spot violence in crowds will be the first-of-its-kind system capable of surveilling large areas.

A new study published this week, “Eye in the Sky: Real-Time Drone Surveillance System (DSS) for Violent Individuals Identification using ScatterNet Hybrid Deep Learning Network”, has revealed research conducted into unmanned aerial vehicles that can use artificial intelligence (AI) to spot violence in crowds. The work is a collaboration between the United States' University of Cambridge with India’s National Institute of Technology and the Institute of Science.

"The proposed method first uses the feature pyramid network (FPN) is used to detect the humans from the aerial image. Next, the proposed ScatterNet Hybrid Deep Learning (SHDL) network is used to estimate the pose for each detected human."

"Finally, the orientations between the limbs of the estimated pose are used by the support vector machine (SVM) to identify individuals engaged in violent activities," stated the paper, explaining its methodology. The drones used were standard Parrot AR 2.0.

However, raising that number to just two violent individuals sees the accuracy drop to 90.6%, while raising it to five sees disappointing results of 84%. The researchers say this malfunction may be due to the "inability of the FPN network to locate all the humans or the incapability of the SHDL network to estimate the pose of the humans accurately."

The paper also specified that some poses may "lead the SVM to classify the activities incorrectly." This is worrisome news about an already worrisome technology.

In addition to concerns that innocent gestures may be mistaken for violent ones, there is public concern over the overall invasiveness of the technology. The development could see drones used by governments to track the activities of potential political dissidents or anyone they deem as opponents.

Regardless of any arising issues, this system, like many other surveillance projects before it, is likely to see continued progress. The study also discussed the competency of other similar programs in existence today. 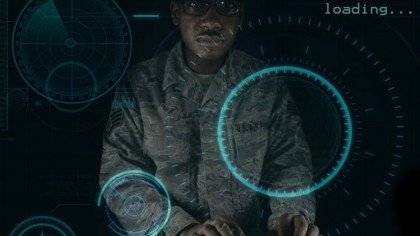 A video surveillance system for identifying abandoned objects, useful in bomb detection, was developed with Gaussian mixture models and Support Vector Machines and currently performs with an accuracy of 84.44%. Meanwhile, forward-backward ratio histograms and a finite state machine have been used in a system designed to protect automatic teller machines (ATMs) from theft with a 96% accuracy rate.

Finally, an HSV and YCbCr color models fire detection system is now spotting fires with 90%. accuracy. However, Eye of the Sky will be the first-of-its-kind system capable of surveilling large areas.

The researchers are set to present their work at the IEEE Computer Vision and Pattern Recognition (CVPR) Workshops 2018 and expect to test their drone system by flying it over two festivals in India. Experimental flights in these severely crowded areas are sure to return some interesting results.

US Marines Are Testing Drones That Can Work as Grenades