These ingestible genetically-engineered bacteria could save the lives of people suffering from hard-to-treat stomach diseases.

A team from the Massachusetts Institute of Technology (MIT) created a swallowable sensor filled with genetically engineered bacteria to help diagnose painful stomach conditions and diseases.

The unique bacteria-on-a-chip technology takes ultra-low-power electronics and uses sensors from living cells in order to transform the bacterial response into a signal that can be read by a standard smartphone.

"By combining engineered biological sensors together with low-power wireless electronics, we can detect biological signals in the body and in near real-time, enabling new diagnostic capabilities for human health applications," explained Timothy Lu, an MIT associate professor of electrical engineering and computer science and of biological engineering.

The study, which appeared in a recent edition of the online publication Science, detailed how the team showed the effectiveness of the chip in pigs. More specifically, the study focused on how those sensors responded to heme -- a component of blood -- and how those sensors could respond to a molecule that indicates inflammation.

The team used previous research done by other synthetic biologists in the past decade. That research documented various innovations in engineering bacteria that can respond to stimuli like disease markers. One of the most helpful findings the MIT team used was that these bacteria could be engineered to produce outputs like light when they detect their stimulus.

MIT wanted to make those bacteria more useful and easily detectable, so they combined the bacteria with an electronic chip that can make the bacterial response more readable to common technology -- like a  smartphone.

"Our idea was to package bacterial cells inside a device.”

"Our idea was to package bacterial cells inside a device,” Nadeau said. “The cells would be trapped and go along for the ride as the device passes through the stomach."

The team also decided to concentrate their efforts on the GI tract and a bleeding GI tract. The causes of bleeding GI tracts can be some of the most difficult to pinpoint, as GI bleeding can be caused by things like angiodysplasia, colon polyps, or cancerous bodies in that area. Symptoms of GI bleeding are far from pleasant and include black stool, bright red vomit, feeling drained and tired, paleness, and unconsciousness if GI bleeding goes undetected.

"The focus of this work is on system design and integration to combine the power of bacterial sensing with ultra-low-power circuits to realize important health sensing applications," Chandrakasan said in a statement.

The team engineered a probiotic strain of E. coli that can release a light whenever it encounters heme. The sensor itself is a cylinder just 1.5 inches long and consumes 13 microwatts of power. The sensor also comes with a 2.7v battery, giving the sensor 1.5 months of continuous use for longer-term tracking.

“The goal with this sensor is that you would be able to circumvent an unnecessary procedure by just ingesting the capsule, and within a relatively short period of time you would know whether or not there was a bleeding event,” Mimee said. 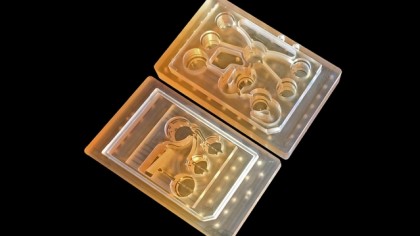 That sensor was ingestible to pigs in the study, but 1.5-inch objects would not be so easily swallowed by the average human. The MIT researchers could look to scale the technology down while maintaining the sensor's effectiveness should they seek conducting human trials.

The researchers also don't plan on stopping with just blood work or the GI tract.

Scientists Use AI and Urine to Diagnose Prostate Cancer

How Does Gravity Work and Could We Ever Develop Anti-Gravity Technology?