Scientists at the University of Manchester have come up with a method for printing electronics that will save cost and increase efficiency, which will propel graphene use to new heights.

Graphene, the wonder lattice composed of carbon atoms, has proven its worth as one of the most essential nanomaterials of the 21st century, due to its superconductor capabilities and its potential to help meet the soaring bandwidth demands.

For this reason--and motivated by growing interest from various industry stakeholders--scientists have been hard at work on streamlining the processes involved in every stage of its use.

Now, researchers from the University of Manchester have developed a way to produce electronics printed with the 2D material not only in a faster way, but in a cheaper manner as well.

Despite their higher scale of conductivity compared to other carbon-based materials as well as their relatively better cost-effective application for IoT, the same two challenges have consistently remained for conductive inks which are currently in use:

They are expensive, and they can oxidize easily, both of which limit their practicality. The team used a material called dihydrolevogucosenone, or Cyrene, which offered a promising alternative.

Based on their experiment with the Cyrene, which they observed to "significantly speed up and reduce the cost of the liquid phase exfoliation of graphite", they found it to also be (1) completely non-toxic but also (2) more sustainable and environmentally-friendly.

A New Era for Graphene

The researchers pointed out that the most significant aspect of their study is that it represents a new phase of evolution for graphene:

"Graphene is swiftly moving from research to application domain. Development of production methods relevant to the end-user in terms of their flexibility, cost and compatibility with existing technologies are extremely important.

This work will ensure that implementation of graphene into day-to-day products and technologies will be even faster," explained Professor Sir Kostya Novoselov, study co-author and expert on all things graphene.

Below he dives into the topic:

Steps on the Path to Industrialization

Now that graphene has successfully passed the first round of evaluations--development and testing by the scientific community--the next step is to devise a strategy for its integration into various industries, some of which produce RFID tags, wearable electronics, antennas transistors, and sensors. 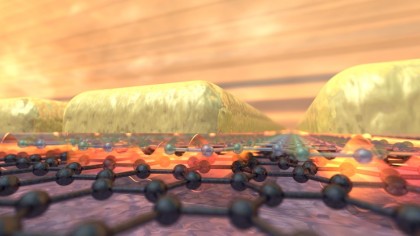 Researchers Use Graphene to Confine Light to the One-Atom Limit

The National Physical Laboratory (NPL) has partnered with the University of Manchester's National Graphene Institute to help with this process, their work resulting in a Good Practice Guide covering all measurement-related topics.

Professor Ling Hao of the NPL, who was also involved in the study, said of this dynamic development: "Materials characterization is crucial to be able to ensure performance reproducibility and scale up for commercial applications of graphene and 2D materials.

The results of this collaboration between the University and NPL is mutually beneficial, as well as providing measurement training for Ph.D. students in a metrology institute environment."

The sky truly is the limit for graphene. It seems there's no stopping the momentum of this super material.

Details about the study appear in a paper, titled "Sustainable production of highly conductive multilayer graphene ink for wireless connectivity and IoT applications", which was published December 5th in the Nature Communications journal.