A team of researchers at the University of Rochester have achieved exciting results in a round of experiments by producing negative mass particles for the first time.

A team of researchers has carried out a study that changes our way of thinking about how objects react when force is applied to them. The fundamentals of physics dictate that only in the presence of negative mass can an opposite, or unpredictable, outcome be achieved.

With research funded by the Air Force Research Laboratory and carried out at the Vamivakas Laboratory, which is part of the University’s Institute of Optics, the team set out to create particles containing a negative mass. It was done by introducing confined light to particles in an optical microcavity—combining two mirrors— after they had gone through an atomically thin semiconductor. The result: negative mass.

The team chose molybdenum diselenide for the semiconductor, and through careful and precise positioning, were able to produce tiny particles, excitons, which combined with photons generated from the confined light. This resulted in the formation of polaritons. 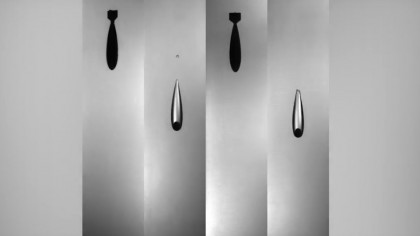 Physicists Crack the Secret to Zero Drag in Water

The findings of the study, titled “Anomalous dispersion of microcavity trio-polaritons”, was in the October 2017 issue of Nature Physics. Nick Vamivakas, associate professor of quantum optics and quantum physics at the University’s Insitute of Optics, called the delicate experiment “interesting and exciting from a physics perspective,” adding about the broader impact of the research, “But it also turns out the device we’ve created presents a way to generate laser light with an incrementally small amount of power.”

Vamivakas explains the true uniqueness of the outcomes that the team were able to produce from experiments: “By causing an exciton to give up some of its identity to a photon to create a polariton, we end up with an object that has a negative mass associated with it. That’s kind of a mind-bending thing to think about, because if you try to push or pull it, it will go in the opposite direction from what your intuition would tell you.”

Although Vamivakas acknowledges that future research and development efforts are “still down the road,” he outlined some key areas which the lab will continue to explore:

• One compelling point for the team is examining potential ways that the device may function as a substrate for laser production. “With the polaritons we’ve created with this device, the prescription for getting a laser to operate is completely different,” Vamivakas shares. “The system starts lasing at a much lower energy input” than traditional lasers now in use.

• Beyond production, the team is also engaged in looking at the physical implications involved that would come with using the device to generate negative mass. “We’re dreaming up ways to apply pushes and pulls—maybe by applying an electrical field across the device—and then studying how these polaritons move around in the device under application of external force.”

Though the team is also quick to point out that other devices of this kind have been in use by other teams, theirs is first to achieve this incredible negative mass outcome. By all indications, they have struck research gold and we look forward to watching how the body of research the Institute produces will continue to evolve.