In late last year, NASA announced that liquid water flows on Mars on occasion, which could mean big things for the future of human life on the currently desolate planet. The discovery was found after the team followed streaking in the surface minerals of the planet, and eventually, it led NASA to find evidence of hydrated minerals. New research has found strong evidence that water doesn't just flow on Mars, but rather at least two giant tsunamis have swept across the martian surface.

A team from the Planetary Science Institute in Tucson, Arizona were the first to notice these possible tsunamis, reviving theories that massive oceans once covered the surface. These martian tsunamis would have dwarfed even the largest ones on earth,  having "reached as high as 120 meters and moved several hundred kilometers inland," according to the Planetary Science Institute.

“For more than a quarter century, failure to identify shoreline features consistently distributed along a constant elevation has been regarded as inconsistent with the hypothesis that a vast ocean existed on Mars approximately 3.4 billion years ago.  Our discovery offers a simple solution to this problem; widespread tsunami deposits distributed within a wide range of elevations likely characterize the shorelines of early Martian oceans.” ~ J. Alexis Palmero Rodriguez, lead researcher 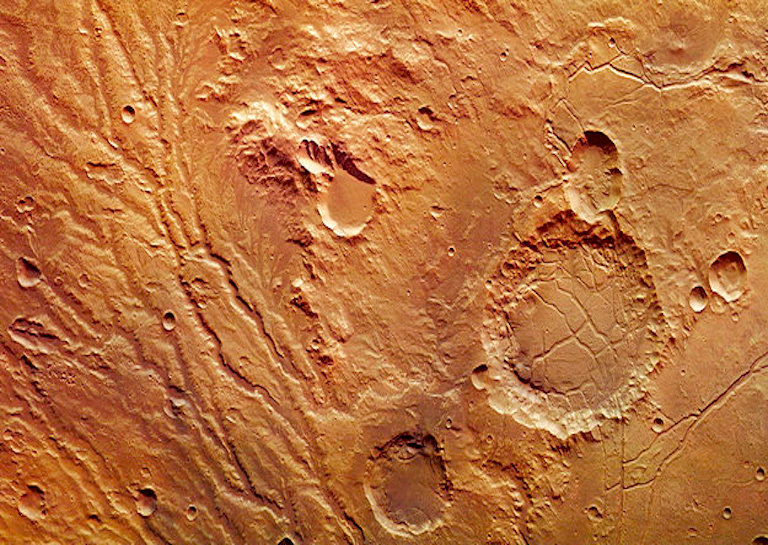 Part of the problems that arose in the past in regards to the ancient ocean theories is that no strong evidence of shorelines is seen on the planet, like those seen on Earth. For the most part, this has led researchers to shoot down the thought that Mars was once home to vast oceans. Evidence of these massive tsunamis explain why there are no shorelines on the planet – the destruction would have covered them up, completely changing the planet's topography.

“During the time period that separated the two tsunami events the ocean level receded to form a lower shoreline and the climate became significantly colder. Evidence for climate change is reflected in the morphology of the tsunami deposits. The older tsunami emplaced enormous boulder-rich deposits and as the wave retreated back into the ocean it formed widespread backwash channels.” ~ J. Alexis Palmero Rodriguez, lead researcher

These backwash channels are what we currently see on Mars, which are typically interpreted as remnants of ancient streams. This new tsunami research seems to solve many of the mysteries that currently surround the planet's topography, and it could provide a big answer to many scientists' eager questions.