Rising sea levels will be greatly impacted by the large amounts of water being dragged into the Marian Trench, according to a recent study.

Based on the emerging body of research and projects in the past two decades, it is clear that scientists are listening for and looking for clues in the ocean that may reveal signs for where we are headed. From data-collecting drones, to designing global warming simulations, it seems that the four massive bodies of water are under the microscope more than ever before.

With aims like this in mind, a team of researchers from Washington University in St. Louis has devised a study that looks at the levels of water intake in the Mariana Trench, the western Pacific region which is also the site of the deepest place on Earth, measuring estimated depths of roughly 11 kilometers.

Setting Up the Correct Approach

To produce a study that showed comprehensive results, the team of researchers collected data for more than a year, utilizing a total of 26 seismographs that explored the ocean floor as well as activity in the surrounding islands. The area was chosen because a dynamic level of plate-shifting activity occurs inside the Trench.

They specifically looked at subduction zones, regions where tectonic shifts between two plates happen: in the Mariana Trench, the western Pacific Ocean plate and the Mariana plate have contact, with the first--also known as the subducting plate--bending and sliding underneath the second. When this happens, massive amounts of water are taken in.

Their challenge was to create a set of methods that accounted for earlier similar studies that "exhibit[ed] large variations in the amount of water that is subducted deeper than 100 kilometres." In other words, they were unable to accurately explain the (1) number of and (2) water holding potential of the subducting plate.

Breaking Through Limitations of Previous Studies

Based on an understanding of how much water a hydrated mantle can hold, and with the new evidence from their data showing that the amount of water intake is "at least 4.3 times more water subducts than previously calculated", they determined that an estimate could be made by increasing the numbers by about three.

This boils down to a more dynamic understanding of the total amounts of water intake occurring in an important region of the world's oceans. “Previous conventions were based on active source studies, which can only show the top 3-4 miles into the incoming plate. 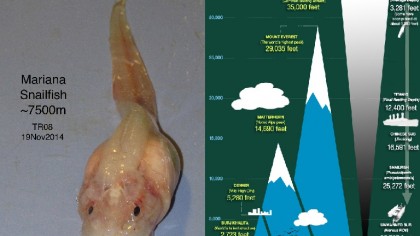 They could not be very precise about how thick it is, or how hydrated it is. Our study tried to constrain that. If water can penetrate deeper into the plate, it can stay there and be brought down to deeper depths," explains Chen Cai, Washington University Ph.D. and first author on the paper.

Now that the picture is clearer, the researchers will need to expand their work to fully understand whether these results indicate a normal part of the Earth's water cycle, or if they point to large environmental issues.

Details about the study appear in a paper, titled "Water input into the Mariana subduction zone estimated from ocean-bottom seismic data", which was published November 14th in the Nature journal.

Via: Washington University in St. Louis

Scientists discover the first dinosaur with a respiratory infection