Scientists have uncovered some exotic quantum behavior of semiconductor materials that turn them into “quantum machines”.

Taking stacked layers of tungsten disulfide and tungsten diselenide that created superlattices, the name for intracately patterned material, the researchers were able to uncover some exotic quantum properties of the material that could lead to new discoveries in energy efficient electronic systems, and even provide the groundwork for a new field of exotic physics.

SEE ALSO: INNOVATIVE QUANTUM MATERIAL COULD BE KEY TO EVEN FASTER QUANTUM COMPUTING

"This is an amazing discovery because we didn't think of these semiconducting materials as strongly interacting," said Feng Wang, a condensed matter physicist working at Berkeley Lab's Materials Sciences Division and a professor of physics at UC Berkeley. "Now this work has brought these seemingly ordinary semiconductors into the quantum materials space."

Two dimensional (2-D) materials that are only a single atom thick can be used like building blocks where they can stack on top of each other to form tiny devices. When the lattices of two similar 2-d materials are used and their lattices aligned well, a repeating-pattern known as a moiré superlattice can be created.

When these superlattices are formed with graphene, for instance, exotic quantum behavior can emerge, such as superconductivity. The new study, which Wang led, demonstrates that the two tungsten-based lattices can likewise be turned into an exotic quantum material.

Co-authors Chenhao Jin, a post-doc scholar, and Emma Regan, a graduate student researcher, built the tungsten disulfide and tungsten diselenide lattices using a polymer-based technique to pick up and transfer flakes of the two materials onto a stack, with each flake measuring just ten microns in diameter.

When they measured the optical absorption of the new lattice samples, they made a remarkable discovery. The absorption of visible light in a device using these two lattices is at its greatest when the light has the same energy as the excitron of the system, which is a quasiparticle that is made from an electron bound to a currently vacant state that an electron can occupy. 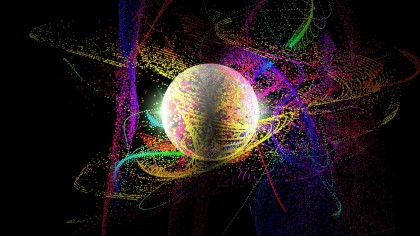 Upon further examination, they discovered that the tungsten materials had indeed formed a moiré superlattice.

"We saw beautiful, repeating patterns over the entire sample," said Regan. "After comparing this experimental observation with a theoretical model, we found that the moiré pattern introduces a large potential energy periodically over the device and could therefore introduce exotic quantum phenomena."

They plan now to explore how this mew quantum system could be applied to the use of light in electronics, the miniaturization of electronic components, and superconductivity.

Their research was published in the journal Nature.