The cells, revealed to be inhibitory neurons, may one day unlock the mystery of what makes us truly different from other animals.

When it comes to studying the brain, neuroscience is constantly making impressive leaps. From identifying the brain cells responsible for particular functions to using stem cells to stimulate tissue healing, it seems there is no limit to what the science can do today.

And yet one question that still evades these proficient researchers is how our human brains differ from those of our other fellow Earth dwellers. Yes, the answer to what sets our brains apart from other animals remains a mystery to this very day.

What makes us human after all?

Now, a new discovery may just bring light to this subject that has troubled both scientists and philosophers from the earliest of times. A team consisting of researchers from the Allen Institute for Brain Science and the University of Szeged in Szeged, Hungary, has revealed a type of human brain cell never-before-seen in mice or other laboratory animals.

The team has dubbed these previously unknown cells "rosehip neurons" in reference to the peculiar bundles each of the cells' axons form around their centers resembling a rose that has shed its petals. But these cells are more than pretty.

Although the researchers are still unclear as to their exact role, these rosehip cells fall into a class of neurons known as inhibitory. Inhibitory neurons are key to ensuring our brain functions smoothly by halting the activity of other brain cells. 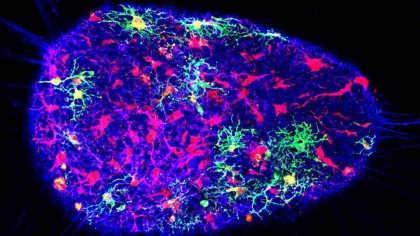 To investigate the potential tasks of rosehip neurons, the teams from each institute undertook their own studies finding results that they were later able to combine into a meaningful outcome. The Allen Institute group uncovered that rosehip cells turn on a unique genetic signature never-before-witnessed in mice brain while the University of Szeged team determined the cells are responsible for synapses with pyramidal neurons, multipolar neurons from the cerebral cortex.

The unique multi-team approach is one of the first human cortex studies to combine these techniques. "Alone, these techniques are all powerful, but they give you an incomplete picture of what the cell might be doing," explained Rebecca Hodge, Ph.D., Senior Scientist at the Allen Institute for Brain Science and an author on the study.

"Together, they tell you complimentary things about a cell that can potentially tell you how it functions in the brain," she added. And what they revealed was that rosehip neurons only attach to one specific part of their cellular partners meaning they are controlling a specialized information flow.

In inhibitory neurons, what this indicates is that rosehip cells likely halt the activity of neurons only in particular spots and only in particular species, possibly humans. Time will be needed to determine whether these neurons are truly unique to mankind, however, for now, they illustrate the issues with using laboratory mice as the model of human disease.

"Our brains are not just enlarged mouse brains," said Trygve Bakken, M.D., Ph.D., Senior Scientist at the Allen Institute for Brain Science and an author on the study. "People have commented on this for many years, but this study gets at the issue from several angles."

"Many of our organs can be reasonably modeled in an animal model," Tamás said. "But what sets us apart from the rest of the animal kingdom is the capacity and the output of our brain. That makes us human. So it turns out humanity is very difficult to model in an animal system."

The study is published in the journal Nature Neuroscience.

Via: Allen Institute for Brain Science