Scientists Figured Out Why Yellowstone's Supervolcano Could Be So Powerful

A team from the University of Oregon used computer imaging to recreate the 7 million year history of Yellowstone's most iconic activity.

Each year, roughly 3.8 million people visit Yellowstone National Park to take in one of the United State's most interesting and stunning views. And each year, the powder keg known as Yellowstone's supervolcano gets more powerful. A team of researchers from Oregon recently published more information as to exactly why that supervolcano continues to get stronger.

The team from the University of Oregon used supercomputer modeling to create new seismic images of the magma bodies flowing underneath Yellowstone National Park. Yellowstone is already world-renown for its geysers and eruptive activity. However, in recent years, its caught the attention of scientists trying to pinpoint the magma chambers below the national park's surface.

According to the most recent data, the last caldera forming eruption happened roughly 630,000 years ago. The last big wave of lava surfaced approximately 70,000 years ago.

The Oregon researchers used supercomputer modeling to see what the most recent action would be. They discovered a "transition zone" where the magma bodies nearly meet. It's in that transition zone where they create a slab of pressure-trapped rock that could be responsible for the area's history of explosions.

"The results of the modeling matches observations done by sending seismic waves through the area," said co-author Ilya Bindeman, a professor in the UO's Department of Earth Sciences. "This work appears to validate initial assumptions and gives us more information about Yellowstone's magma locations."

The 2014 University of Utah paper proposed that huge amounts of C02 and helium escaping from the ground could indicate more magma. A follow-up University of Utah study indicated that there was, in fact, a second larger body of magma between 20 to 45 km deep.

Bindeman's team took that data and worked backward in order to determine the composition, state and amount of magma. They ran simulations that helped them theorize the evolution of the two chambers over the course of Yellowstone's 7 million year history. 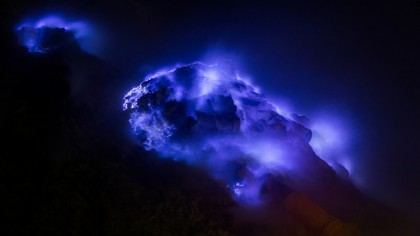 "We think that this structure is what causes the rhyolite-basalt volcanism throughout the Yellowstone hotspot, including supervolcanic eruptions," Bindeman said. "This is the nursery, a geological and petrological match with eruptive products. Our modeling helps to identify the geologic structure of where the rhyolitic material is located."

"This research also helps to explain some of the chemical signatures that are seen in eruptive materials," Colón said. "We can also use it to explore how hot the mantle plume is by comparing models of different plumes to the actual situation at Yellowstone that we understand from the geologic record."

Colón noted that these structures aren't limited to just Yellowstone National Park. However, he said the unique geometry of the sill could help explain various chemical signatures in the eruptive materials. Colón and the Oregon team are continuing to explore exactly what affects the chemical makeup of magmas that erupt from places like Yellowstone.

A 'Solar Tsunami' Could Knock Out Global Internet. Here's What That Means

Could Simulation Theory Explain Why "Space is Hard"?