Scientists Finally Cracked Why Our Knuckles Pop and Crack

A team of French researchers determined that the literal popping of air bubbles in the knuckles' joint fluid causes the popping sound associated with chronic knuckle-crackers.

After over a century of mystery, researchers have finally figured out what exactly causes the often-obnoxious cracking and popping sounds while someone cracks their knuckles.

Previous research remained inconclusive, and due to the variations in people's joints, it seemed like that uniform cracking noise would remain a mystery forever. For instance, some joints simple don't crack. Among those that can crack their knuckles, they often can't repeat the process until nearly a half hour later.

So what's the mystery behind the popping? The international team of scientists determined in their findings that it's the popping of bubbles in the hand's joint fluids. That popping noise is exactly what researchers have theorized for over 50 years -- but now it's finally proven thanks to a mathematical formula and new rendering of the joint.

To be more specific, the cracking sound comes from a "collapsing cavitation bubble in the synovial fluid inside a metacarpophalangeal joint during an articular release."

"The sound that is generated when one cracks his or her knuckles is due to the partial collapse of a cavitation bubble that's in the fluid in the joint," explained Abdul Barakat, a professor at the Ecole Polytechnique.

To prove this longstanding theory, V. Chandran Suja and Abdul Bakarat from Ecole Polytechnique in France crafted mathematical renderings of the joint where the popping happens, called the metacarpophalangeal joint (MCP). They then observed the popping, converted it into math equations, and used those equations to generate computer simulations of knuckle cracking. Thanks to that math, the computer simulations showed the researchers exactly what happens in the moments before the pop.

"It could be multiple bubbles, but we showed that the collapse of a single bubble is sufficient to give you the signature sound you get," Bakarat said. 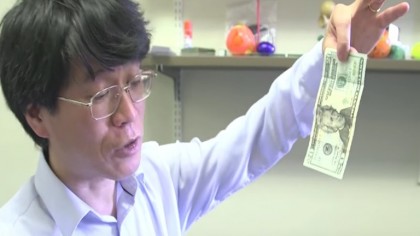 Why it's Impossible to Catch a Dollar Bill with Your Fingers

The models created by the French team don't contradict research done in 2015 by a team from the University of Alberta. That team used MRI scans to show the details of gas bubbles that remained in the fluid even after the knuckle had been popped. Thus, the team concluded that the sudden appearance of those bubbles led to the noise rather than the popping of them. However, the most recent research from Suja and Bakarat suggest that only a partial collapse of these bubbles are needed to actually hear the pop. Hence, some bubbles can still be around even after the knuckles were cracked.

"Mathematical modeling is particularly useful because [real-time] imaging is not sufficiently rapid to capture the phenomena involved,” he said in an interview with Gizmodo. “Another advantage of the modeling is that it allows varying one parameter at a time and therefore permits determining which parameters are truly important in determining the behavior. In this regard, we found that the parameter that has the most effect on the sound generated by knuckle cracking is how hard you pull on the knuckle. How fast you pull, the geometry of the joint, and the viscosity of the fluid (which changes with age) do not have a very strong effect."

Further research is still needed to determine exactly what happens to the body whenever knuckles are cracked. Is it unhealhty? It's certainly habit forming nad one of the quickest signs of nervousness in some people. As of this writing, there's no study that shows a correlation between knuckle popping and arthritis, so at least that myth can be kept at bay for now.

Baffling Radio Signal Coming From Inside Our Galaxy, Announce Scientists

Meteor Showers: What Are They, How Often Do They Happen, and Why?