Researchers have assembled the genome of the salamander axolotl and hope to deduce the key to its impressive regeneration abilities.

Regeneration is an amazing ability by some animals that allows them to regrow lost parts.

Scientists have long been interested in this ability testing everything from superpower hormones to super material in graphene to find a way to mimic it in humans.

Now, researchers at the University of Kentucky may have found a key discovery in the quest for human regeneration. They have assembled the genome of the salamander axolotl. This mapping is important as axolotls have long been known as ideal models for regeneration. 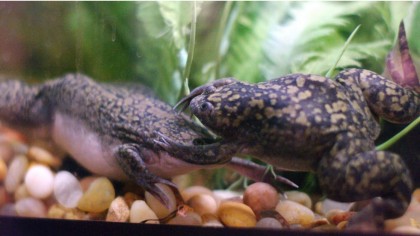 "It's hard to find a body part they can't regenerate: the limbs, the tail, the spinal cord, the eye, and in some species, the lens, even half of their brain has been shown to regenerate," said Randal Voss, a professor in the UK Spinal Cord and Brain Injury Research Center and a co-PI on the project.

Mapping the salamander genome was no small feat. Though the axolotls share many of the same genes as humans, their genomes are ten times larger.

As such, scientists up to now had not yet succeeded in assembling the impressive genome in the correct order. This was thwarting them from making the large-scale analyses of structure that would allow them to discover how these animals get their super regeneration abilities.

Current undertaking to map the human genome has given researchers the power to reproduce that data in other organisms. However, animals such as the axolotl possess genomes so complex they make these efforts largely impossible.

To overcome this issue, the researchers adapted a classical genetic approach called linkage mapping to put the axolotl genome together correctly. This marks the first genome of this phenomenal size to be assembled to date.

"Just a few years ago, no one thought it possible to assemble a 30+GB genome," said Jeramiah Smith, an associate professor in the UK Department of Biology and Voss' co-PI.

"We have now shown it is possible using a cost-effective and accessible method, which opens up the possibility of routinely sequencing other animals with large genomes."

Voss and Smith have already used the assembled data to identify a gene responsible for a heart defect in an axolotl. The experimentation, meant to act as proof of concept, is providing a new model of human disease.

"Biomedical research is increasingly becoming a genetically-driven enterprise," said Voss. "To understand human disease, you have to see be able to study gene functions in other organisms like the axolotl."

"Now that we have access to genomic information, we can really start to probe axolotl gene functions and learn how they are able to regenerate body parts. Hopefully, someday we can translate this information to human therapy, with potential applications for spinal cord injury, stroke, joint repair...the sky's the limit, really."