Scientist have found a way to control the quantum states of atoms, opening the floodgates to new quantum possibilities.

This past week researchers have taken another big step towards understanding the quantum world, steps that could help scientist better understand the elusive and complicated world of quantum information processing.

The quantum world is still a bit of mystery for researchers but the potential benefits from harnessing the properties of the quantum world, including quantum computing, security, AI, and networks. With this new foundation, set in place the researchers at the Institute for Basic Science could be opening the floodgates to an entirely new set of rules for “quantum bits”.

Before you understand the significance of what the IBS research team has accomplished, you should understand the basic principle of quantum spin. Quantum spin or the intrinsic angular momentum that is associated with a subatomic particle like an electron, think of it as a needle pointing to two separate directions either, either left or right.

Nevertheless, according to the laws of quantum mechanics, the spin of a subatomic particle can point to two different directions at the same time. However, this superposition state is very sensitive to environmental factors. These rules of the quantum world are crucial to understanding the quantum information process.

In their research, published in the journal Science Advances tried to minimize decoherence or information lost in a quantum system by assembling atoms extremely close together.

By bringing atoms together, almost a million times closer than a millimeter, the IBS team was able to protect the superposition of two magnetically coupled atoms, 20 times longer than an individual atom. 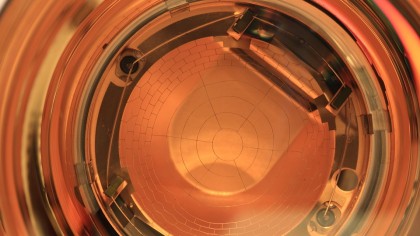 In short, these two dancing atoms can be affected by external environment resources. Researcher, Dr. Yujeong Bae describes it perfectly, "Like a phalanx, the two atoms were able to protect each other from external influences, better than on their own. In that way, the entangled quantum states we created were not affected by environmental disruptions such as magnetic field noise.”

Again, this breakthrough could help researchers build even more sophisticated structures in order to explore quantum bits for the future of information processing.

Summarizing it perfectly, Professor Andreas Heinrich, director of QNS states, “This is a significant development that shows how we can engineer and sense the states of atoms. This allows us to explore their possibility to be used as quantum bits for future quantum information processing”.

Excited how quantum mechanics will shape your future?