Researchers have been able to breed a crop that would enable the plant use less water by changing the expression of one gene.

Agriculture at the moment uses up 90 percent of global freshwater. However, production has to dramatically increase to feed the world’s growing population.

Researchers from the University of Illinois have managed to improve the way a crop uses water by 25 percent, without giving way from the plant's yield.

Experts have managed to do this by altering the expression of only one gene found in all plants. These modified plants will grow faster and yield more than their ordinary counterparts when water is limited.

To be able to engineer the plants, the researchers increased the levels of a photosynthetic protein (PSbS). This protein will trick the plant into closing their stomata in a partial way to conserve water. The microscopic pores in the leaf will allow water to escape through the process of transpiration.

The team has improved the plant's water-use-efficiency, which is the ratio of carbon dioxide entering the plant to water escaping, by 25 percent. They have not significantly sacrificed photosynthesis or yield in field trials. 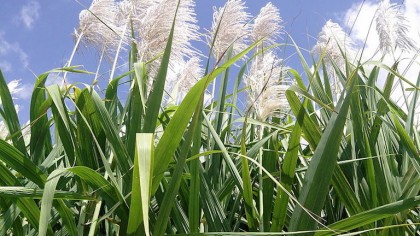 Seven Cool Biofuel Crops That We Use for Fuel Production

"Crop yields have steadily improved over the past 60 years, but the amount of water required to produce one ton of grain remains unchanged - which led most to assume that this factor could not change," said Stephen Long, Ikenberry Endowed Chair of Plant Biology and Crop Sciences at the University of Illinois.

"Proving that our theory works in practice should open the door to much more research and development to achieve this all-important goal for the future."

"These plants had more water than they needed, but that won't always be the case," said Katarzyna Glowacka, a postdoctoral researcher who led this research at the Carl R. Woese Institute for Genomic Biology (IGB) at the University of Illinois at Urbana-Champaign.

'Hacking stomatal response to the quality of light'

The carbon dioxide concentration in our atmosphere has risen by 25 percent in just the past 70 years. This allows plants to gather enough carbon dioxide without fully opening their stomata pores.

"Evolution has not kept pace with this rapid change, so scientists have given it a helping hand," Dr Long, also a professor of crop sciences at Lancaster University, said.

The team have tested their hypothesis using tobacco. Tobacco is easier to modify and faster to test compared to other crops.

The researchers say they will now apply their discoveries to improve the water-use-efficiency of food crops. They will also test the efficiency in water-limited conditions.

"Making crop plants more water-use efficient is arguably the greatest challenge for current and future plant scientists," said Johannes Kromdijk, a postdoctoral researcher at the Institute for Genomic Biology (IGB) at the University of Illinois at Urbana-Champaign.

"Our results show that increased PsbS expression allows crop plants to be more conservative with water use, which we think will help to better distribute available water resources over the duration of the growing season and keep the crop more productive during dry spell," he said.

Via: University of Illinois, ACES

Researchers Develop Robot That Tells Farmers When to Water Crops