We are becoming more and more susceptible to antibiotic resistance so researchers are looking for new ways to fight deadly infections.

Deadly bacterial infections caused by antimicrobial resistance (AMR) is a serious concern to consider, in fact, one topic up for discussion at the upcoming World Antibiotic Awareness Week is the effect of antibiotics as growth promoters for livestock and how our consumption of farm animals is leading to a growing resistance to life-saving medicines.

"On the use of antibiotics in animals internationally, the picture is also worrying: An estimated 63,000 tonnes of antibiotics per year are given to cattle, pigs, and chicken across the world. Though there’s massive variation by country – the USA, Hungary, Spain, and Germany are the biggest offenders. New Zealand is the lowest, and the UK is somewhere in the middle,” explains Dr. Roger Harrison, a Public Health expert from The University of Manchester.

The WHO also issued a report detailing the crisis of antibiotic resistance, calling it a “global health security threat.” To combat this, researchers like Dr. Chandan Sen at Ohio State are expanding on an idea first developed in 1992, but now with modern technology, electrically charged bandages are becoming a reality.

Called, “wireless electroceutical dressing” (WED) these bandages are embedded with silver and zinc particles that once wet produce a small electrical field. The process is inspired by biofilms, congregations of microorganisms on surfaces that protect their component bacteria against antibiotics and the immune system.

Microbiologists discovered that these biofilms use electrostatic interactions to grip onto the surface. To defeat this process, scientists considered attacking with the same action and restore functional wound healing. 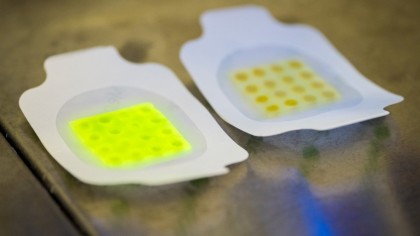 The study was published in Annals of Surgery where Sen and colleagues applied the charged patches to pigs within two hours of wound infection and noticed that wounds were most likely to close with the WED than a conventional wrapping. Wounds were treated with placebo dressing or WED twice a week for 56 days

"The fact that wireless electric dressing is FDA-cleared and already in clinical use heightens the need to understand underlying mechanisms to enable optimal use," Sen said. "Since it relies on electrical principles, it's not subject to the mechanisms that may promote drug resistance.

Understanding how this novel dressing may influence microbial, host and host-microbe interactions will determine the optimal use of this simple technology platform,” Sen said in a statement.

WED is already being considered for the healing of burn victims, who are susceptible to infection as the barrier function of the skin is breached during burn injuries.

"Our study shows that WED may be viewed as a first generation electroceutical wound care dressing, and it also accelerated functional wound closure by restoring skin barrier function," Sen said.

A clinical trial is beginning next month in collaboration with the Department of Defense to test this procedure on patients.

Via: EurekAlert!, IFLScience!, WHO