Researchers in Pakistan discovered a fungus that eats plastic, such a find could mean very good things for the future of our environment.

It takes up to a millennium for plastic to completely degrade in landfills. This is very bad news considering that since the beginning of plastic production 65 years ago, we’ve produced 8.3 billion tonnes. 70 percent of this is now in waste streams, most of which is sent to landfills.

Because of its xenobiotic nature – meaning that they did not exist before their synthesis by humans - plastic is nearly impossible to break down organically.

"We are rapidly heading towards 'Planet Plastic,' and if we don't want to live on that kind of world, then we may have to rethink how we use some materials, in particular, plastic," industrial ecologist from UC Santa Barbara, Dr. Roland Geyer told BBC News.

To combat this inevitability, a group of scientists found an unlikely ally in nature; a plastic-devouring soil fungus.

In a study, titled “Biodegradation of Polyester Polyurethane by Aspergillus tubingensis” and published this year in the journal Environmental Pollution, lead author Sehroon Khan of the World Agroforestry Center and his team used a dump in Islamabad, Pakistan for samples. They wanted "to see if anything was feeding on the plastic in the same way that other organisms feed on dead plant or animal matter,” said Khan in a statement.

The fungus they found is a soil-dweller called Aspergillus Tubingensis, and it functions by colonizing the plastic itself. It then secretes enzymes that can destroy the chemical bonds found in polymers.

Plastic is made of chains of like molecules, called polymers, which come in forms such as polyethylene, polystyrene, and polypropylene. They are normally composed of carbon and hydrogen and sometimes oxygen, nitrogen, sulfur, chlorine, fluorine, phosphorous, or silicon.

Aspergillus Tubingensis is a polyester polyurethane degrading fungi using the strength of its mycelia to help tear the plastic apart. It doesn’t take very long either; the scientists noticed that a significant breakdown of the plastic samples took only weeks to achieve. 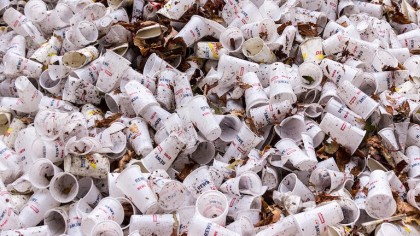 The most obvious use for such a find would be to start with the mountains of trash around the globe.

The researchers say that once they pin down the optimal conditions (temperature and pH levels) for the fungus to thrive then maybe the first place they’d like to deploy this plastic killer is in waste treatment plants.

These miracle fungi aren’t the first member of the natural kingdom to exhibit an appetite for plastic. Earlier this year, Dr. Federica Bertocchini of the Institute of Biomedicine and Biotechnology of Cantabria, Spain accidentally discovered that wax worms she’d been studying ate through a plastic bag they were held in. They did it with efficiency as well, after Bertocchini exposed the worms to more plastic bags they ate through the material in 40 minutes. After 12 hours they had reduced the bag by 12 milligrams (0.0004 ounces).