Researchers have found evidence of gamma-ray bursts being created by the behavior of a distant, and newly discovered star.

A large part of the thrill, and even fear, behind the space sciences is that it offers a true picture of the random, and unpredictable, set of cosmic phenomena that could be occurring around our planet at any given moment.

Among them all, star systems seem to capture our attention in a more dynamic way, most likely due to their potential to shoot cosmic rays at Earth, though in some cases, like terrestrial gamma-ray flashes (TGF), the unexpected source can be hurricane storm activity.

Now, researchers are investigating the behavior of one of the most exciting and elusive star systems in the galaxy, Wolf-Rayet stars, and more importantly, the role the rapidly moving cloud of dust around the system plays in creating long-duration gamma-ray bursts (GRBs).  Named the 2XMM J160050.7–514245, the Wolf-Rayet system also goes by the nickname of Apep, and it sits inside a constellation named Norma, or The Carpenter's Square (Where, or where, do astronomers get these names?).

In the case of Apep, however, the name is a reference to an ancient Egyptian deity of the same name in the form of a large serpent, and given the chaotic nature and unique shape of the system, the name more than fits. The European Southern Observatory's (ESO) VISIR instrument first caught sight of the system.

GRBs, some of the most powerful and short-lived explosions in the entire universe, can last as long as a few hours or as little as a few thousandths of a second. If their lifetime passes the two-second mark, they can be considered long-duration GRBs.

Below is a video of the time-sensitive process that goes into tracking GRBs:

On the one hand, Apep's stellar wind is moving at a rate of 12 million kph based on ESO measurements, while the dust pinwheel is traveling at a slower rate of two million kph, which the team believes is happening because the wind is being launched in different directions. Either way, the evidence of the GRB phenomenon indicates to the researchers that the star system is moving at such an astonishing speed because it's on a kind of suicide mission.

Regardless of the cause, the team is thrilled about the chance to make such an observation. It's a rare opportunity to make observations about a dynamic star system, which, given the dynamic combination of factors involved in both GRB formation as well as Wolf-Rayet star systems, their excitement seems to well justified. 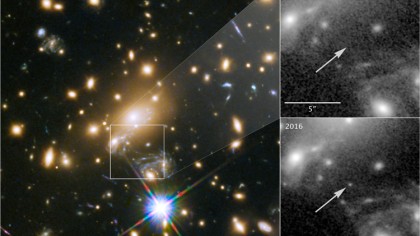 “This is the first such system to be discovered in our own galaxy,” explains Joseph Callingham of the Netherlands Institute for Radio Astronomy (ASTRON), lead author of the study reporting this system, adding “We never expected to find such a system in our own backyard.”

Details about the study appear in a paper, titled "Anisotropic winds in a Wolf–Rayet binary identify a potential gamma-ray burst progenitor", was published November 19th in the Nature Astronomy journal.

Astronomers spot a neutron star devouring matter from a nearby star