The results of a study conducted by a pair of neurologists on the impact of low-level electrical stimulation on cues in the brain affecting movement and perception will soon be published.

A recent study carried out by a team of neurologists is providing new insights about ways to utilize brain plasticity—or the brain’s ability to evolve—towards repairing neural damage in patients which was brought on by injury or stroke.

The new study was co-authored by Marc Schieber and Kevin Mazurek of the University of Rochester Medical Center Department of Neurology and the Del Monte Institute for Neuroscience. The pair has shown that delivering small doses of electrical stimulants to the premotor cortex of monkeys, a part of the brain responsible for motor skills. Through eliciting a response, they were able to essentially override prompts from the brain.

The study, titled “Injecting Instructions into Premotor Cortex,” will be published in the Neuron journal.

In the experiment, the team trained two rhesus monkeys to perform tasks based on visual cues and movement:

-First, the two monkeys were given four objects, around each of which a light—four in total—appeared that could be turned on or off.

-The pair would then hold onto a handle in its central position.

-Next, they would use their hands to manipulate the objects, the action based on which lights were switched on.

-Each monkey’s premotor cortex was exposed to low levels of electrical stimulation at the same time the lights were turned on.

-The scientists also made the choice to pinpoint a different area of the brain for stimulations that corresponded individually to each of the various lights and movements.

Schieber explains the motivation behind the research: "Researchers have been interested primarily in stimulating the primary sensory cortices— the somatosensory cortex, visual cortex, and auditory cortex—to input information into the brain. What we are showing here is that you don’t have to be in a sensory-receiving area in order for the subject to have an experience that they can identify.” 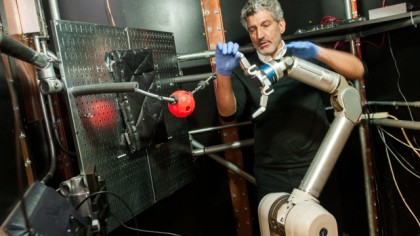 The pair were able to trick the mind—by replacing existing cues—to elicit different responses: "The analogy is what happens when we approach a red light," said Schieber. "The light itself does not cause us to step on the brake, rather our brain has been trained to process this visual cue and send signals to other parts of the brain that control movement. In this study, what we describe is akin to replacing the red light with an electrical stimulation which the brain has learned to associate with the need to take an action that stops the car.”

The research is very promising and could impact medicine in two key areas: improving treatment options for people who have suffered a decrease in motor skills from injury, and more importantly, acting as a research base for future development in the area of neuroprosthetics.

Via: University of Rochester, Neuron

The Ebola virus can lead to recurrent infections even after treatment