Scientists have uncovered definitive proof of particles that link the galaxies, and it will have significant and large-scale implications in the field of cosmology.

It seems that a recent breakthrough is revealing a kind of Holy Grail for understanding the universe, or at least a very significant part. Half of the missing matter, yes half, of the universe, has been found by two dedicated teams of scientists. This includes the tiny particle trio of protons, neutrons and electrons, whose presence was known but whose location and existence could not be definitively proven. 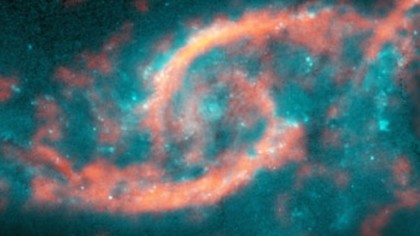 On the subject of the implications of the findings, Ralph Kraft of the Massachusetts-based Harvard-Smithsonian Center for Astrophysics made a very clear point: “Everybody sort of knows that it has to be there, but this is the first time that somebody – two different groups, no less – has come up with a definitive detection,” expanding on his point, “This goes a long way toward showing that many of our ideas of how galaxies form and how structures form over the history of the universe are pretty much correct,” he says.

So, what explains the existence of such a large quantity of unaccounted matter? Our universe, which encompasses an unfathomable area of space, is everything, yet at the same time consists of an unknown number of components. The existence of dark matter, an elusive substance whose presence stretches throughout the universe, can in itself only be proven in relation to the gravitational pull it exerts.

For the first time, with definitive proof, an alternative to the dark matter explanation for the connection of galaxies could be put forward. Instead, quark-based particles known as baryons, were found operating in the form of hot, diffuse gas encased in filaments.

About the landmark find, team leader Hideki Tanimura of the France-based Institute of Astrophysics optimistically remarked, “The missing baryon problem is solved.” University of Edinburgh-based scientist Anna de Graaff led the other team.

de Graaff had also been part of a group, who with another team, had found definitive proof verifying the presence of intergalactic gas filaments in 2015. Tanimura’s team and de Graaff’s team found the gases to be three times and six times denser, respectively, than the average for normal matter existing in the universe. The Planck satellite picked up the dim blotches that served as evidence.

This means that the proof was there before, but before now due to the fragile nature of baryons—they are not hot enough to be detected by X-ray telescopes—they could not be observed. Elaborating on the timeline of observation leading up to this recent discovery, University of College London-based Richard Ellis said, “There’s no sweet spot – no sweet instrument that we’ve invented yet that can directly observe this gas,” adding candidly, “It’s been purely speculation until now.”

The observation was made possible through the Sunyaev-Zel’dovich Effect, which causes a shift in the apparent brightness of the cosmic microwave background—electromagnetic radiation that is remnants of an early period of the universe in Big Bang cosmology. The dim patches which are left get picked up as images.

For scientists who undertake the important work of monitoring, documenting and proving the presence of what lies beyond planet Earth, the task is not explaining the unexplainable. Rather, as these scientists have proven, it is about explaining the unseeable. Many others that follow will thank them for their important contribution.