Scientists Just Taught an Octopus to Use a Camera

Who says you can't teach an old octopus new tricks? Wait, no one says that. Well, a group of scientists just taught one of our cephalopod friends how to take selfies with a camera.

The crew spent weeks building custom rigs to allow the octopus to press the camera button on command, and it was well worth the time. Named Rambo, the octopus  calls the New Zealand Aquarium home. Sony teamed up with biologists at the Aqaurium to see if octopi could be taught photography. Check out the process in the video below.

The crew tried almost one dozen different camera rigs before the settled on a working design. Using the new TX 30 underwater camera, the octopus is not snapping picks for all the visitors of the aquarium.

Believe it or not, Rambo takes pictures of those who stand in front of the camera on command, and you can check out the rest of the photos if you are interested, on their Facebook page here.

Understanding how an octopus is able to take a picture is a little more difficult. The tentacles of octopi are capable of functioning as their own nervous system, which allows each to essentially operate independently. This is also the reason why if you cut off an octopus tentacle, it will likely continue trying to attack you. The team had to train the octopus to reach down a long tube and press a button, a task only accomplished through repetition and rewards. 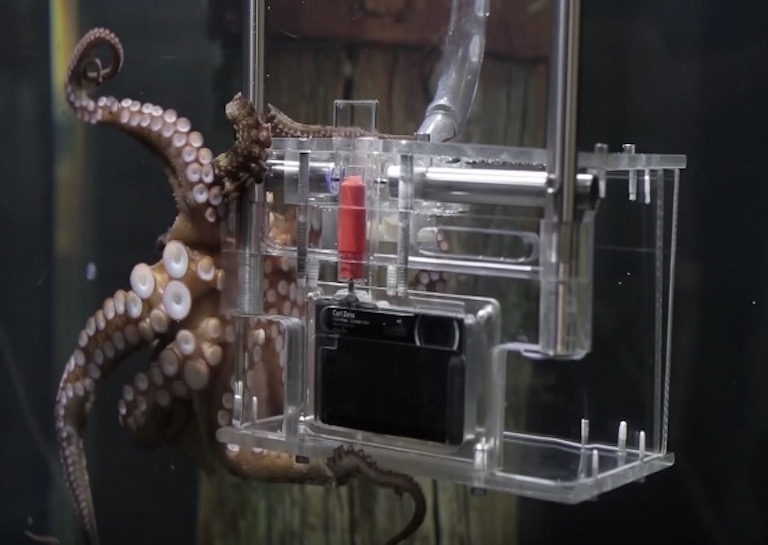 SEE ALSO: Nautilus Researchers Stumble Across the Most Adorable Squid