Researchers have uncovered the much sought-after and exotic quantum spin liquid state emerging from the perovskite-related metal oxide TbInO3.

In what may be the most exciting news of the week, researchers have made a breakthrough discovery in the search for new states of matter uncovering the much sought-after quantum spin liquid state.

Using experimental technologies, the team, led by the University of Liverpool and McMaster University scientists, has found that the perovskite-related metal oxide, TbInO3, exhibits this unusual and exotic state.

This unique state was theoretically proposed back in the 1970s by the Nobel laureate Philip Anderson, and its materialization is still widely contested.

The state was believed to be achieved in a system of interacting quantum spins and would be referred to as a "liquid" as it is a disordered state in comparison to a ferromagnetic spin state.

This results in magnetic moments that have extraordinary liquid-like properties. For instance, they do not freeze or order even at absolute zero.

The team combined the use of such advanced techniques as inelastic neutron scattering and muon spectroscopy to find, much to their surprise, that the state could emerge from the complexity of  TbInO3's local environment around the magnetic ions. 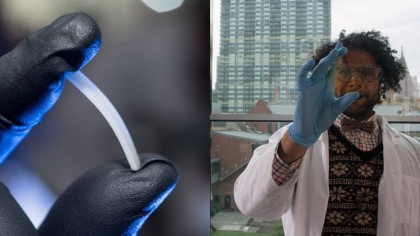 This was unexpected as TbInO3 is a material whose crystal structure does not lend itself to such magnetic behavior.

“It has taken us several years of hard work and experiments to reach this point in our understanding of TbInO3," said Lucy Clark, from the University’s Materials Innovation Factory who leads a programme of quantum materials research.

“When studying intricate quantum states of matter like the quantum spin liquid, carrying out one experiment often raises more questions than it can answer. In the case of TbInO3, however, the physics is particularly rich, and so we were especially driven to persevere. Our study shows that TbInO3 is a fascinating magnetic material, and one most likely to have many more intriguing properties for us yet to uncover.”

The researchers were quick to point out that when it comes to TbInO3 there is much more than meets the eye.

"But with the full complement of modern experimental techniques at our disposal, the low-temperature magnetism of this structure, based on two distinct terbium environments, exhibits an altogether exotic quantum disordered state of matter – an unexpected and exciting result.”

The discovery can result in wide-ranging future potential applications particularly in the development of quantum computing.

The study is published in the journal Nature Physics.