Scientists Map Chromosome Movement For the First Time Ever, Turns Out it is Like a Ballet

Scientists have been studying human chromosomes for years now looking at everything from the DNA mutations that could produce superhumans to the possibility of creating a synthetic human genome. Never before, however, has anyone considered exploring the movement of these DNA molecules.

The first-ever mapping of chromosome movements

Now, new research out of the University of Texas at Austin has used computer modeling to map, for the very first time in history, the movement of a chromosome. The result is a graceful dance resembling a ballet that illustrates how billions of DNA base pairs manage to elegantly pack themselves into an inconceivably small space without ever getting tangled.

"Rather than the structure, we chose to look at the dynamics to figure out not only how this huge amount of genetic information is packaged, but also how the various loci move," said in a statement Dave Thirumalai, chair of UT Austin's chemistry department and contributing author to the study. What they found is that the choreography varies depending on cell types and even among cells of the same type.

However, what is truly revolutionary is what this new mapping could reveal about the role that chromosome movement may play in genetic-related factors ranging from disease to eye color. It turns out, that role is quite important.

"We learned it is not just the genetic code you have to worry about. If the timing of the movement is off, you could end up with functional aberrations," explained Thirumalai.

Gene expression is a dynamic process

The movements of each chromosome were found to change depending on the cell, meaning the same chromosome would move completely differently when in a different cell. "Gene expression, one of the most important biological functions of cells, is a dynamic process rather than a static state," concluded Shi, who is also the paper's lead author. 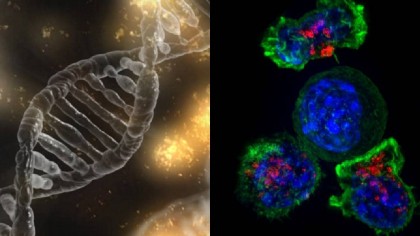 "For every gene to be expressed in human cells, the distant regions of the chromosome must come into contact. When these dynamical processes are disrupted, cells may die due to the failure of expression of a few crucial genes or sometimes becomes a cancerous cell," he added.

Shi hopes that by studying the dynamics of different chromosomes, such as how long it takes for the molecules to meet and when they meet, may lead to further understanding of diseases. The key would be to determine whether abnormal cells, responsible for health disorders, have different dynamics.

"It would be very interesting to see if the chromosomes in a cancer cell, where there is some mutation, if the movement is different," Thirumalai said.

Via: University of Texas