Scientists May Have Found Evidence of the Elusive Sterile Neutrino Particle

A new report from the MiniBooNE experiment has been making headlines among physicists due to its potential to indicate proof of the sterile neutrino.

By  Loukia Papadopoulos
June 04, 2018
Inside of the MiniBooNE neutrino detector Princeton

Sterile neutrinos have thus far been hypothetical particles believed to interact only via gravity avoiding any of the fundamental interactions of the Standard Model of particle physics. Physicists have long been searching for proof of these fundamental particles speculating they may be responsible for several unexplained phenomena such as dark matter and baryogenesis.

If proof of the existence of sterile neutrinos should arise it would shatter the Standard Model that has dominated the field of particle physics since 1975. The result could be the introduction of an entirely new model of cosmology.

Now, a new report from the MiniBooNE experiment from the Fermi National Accelerator Laboratory has been making headlines among physicists due to its potential to indicate proof of the sterile neutrino. MiniBooNE was developed to review an experiment from the 1990s that had found evidence of the so far elusive elementary particle.

The Liquid Scintillator Neutrino Detector (LSND) experiment conducted at the Los Alamos National Laboratory in New Mexico had produced evidence of the sterile neutrino but had been unsuccessful at replicating the results. Meanwhile, all other studies had found no trace of the speculated particle and LSND’s results were set aside till now.

The Standard Model features a list of particles that are responsible for how matter and energy interact in the universe. So far only three types of neutrinos exist in the model but sterile neutrino believers think the particle might be a fourth.

To prove this, both the LSND and MiniBooNE's researchers fired beams of neutrinos at a detector located behind an insulator (water in LSND and oil in MiniBooNE) to block out all other radiation. They then counted how many neutrinos of each type had hit the detector.

Both studies found more neutrino detections than what can be explained by today’s Standard Model. The physicists wrote this may be proof of a fourth type of undetectable neutrino speculated to be the sterile neutrino.

Unfortunately, other neutrino experiments such as the Swiss underground Oscillation Project and the IceCube Neutrino Observatory in Antarctica have failed to find similar results. In addition, a previously reported signal for the particles, missing antineutrinos around nuclear reactors, was revealed by the Chinese Daya Bay nuclear plant to be an error in calculations. 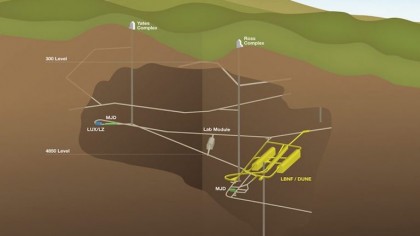 As a result, many physicists are waiting for further evidence before accepting the existence of the new particle. The chance that both MiniBooNE and LSND’s outcomes may be the result of some unknown error can simply not be discounted yet.

Future work in the field, such as the IsoDAR experiment, may prove more conclusive. The experiment’s website states the study is designed to "definitively address" the topic.

IsoDAR will use a high statistics data sample to enable the accurate study of any detected signals. “With respect to sterile neutrinos, accurately mapping out the oscillation wave within the detector will conclusively test if an observed signal is associated with the recently published sterile neutrino anomalies that are of great interest in the community,” states the site.

Via: High Energy Physics via arXiv.org