Scientists May Have Solved a 35-Year-Old Quantum Mystery

Scientists appear to have finally discovered the answer to the 35-year-old mystery of why quarks—the building blocks of protons and neutrons, collectively called nucleons—appear to slow down when they merge into an atomic nucleus, according to a report by LiveScience.

For 35 years, scientists have tried and failed to understand why quarks slow down to a drastic extent once they enter into an atomic nucleus. The reason why this is especially bothersome for scientists is that the quarks of the nucleon are bound together by gluons and are governed by what’s known as the strong force, which is about 100 times as powerful as the electromagnetic force that keeps electrons in orbit around the atomic nucleus and binds the atomic nucleus itself together.

It’s the strong force that overwhelmingly governs the internal momentum of a nucleon’s quarks, so it shouldn’t matter to the speed of the quarks whether or not they make up a free nucleon or a nucleon that is part of an atomic nucleus, yet scientists have seen that this appears to be the case.

It’s what’s known as the EMC effect, after the European Muon Collaboration at CERN who first discovered it in 1983, and it has consistently defied physicists’ attempts to explain.

The CLAS Collaboration, an international team of scientists, appears to have found the answer to the EMC mystery. Their research, published in the journal Nature this month, focused on studying something known as “correlated pairs” of nucleons.

Even though a nucleon is really just a system of three bound quarks in space, these systems generally stay within their own pocket and don’t invade the space of another nucleon. Sometimes though, these two pockets will come into “contact” and overlap each other for a period of time before separating again. When this happens, they are said to be short-range correlated (SRC) pairs.

What the researchers found was that this overlap may be strongly tied to the observed EMC effect. Their data appears to show that the quarks of a nucleon don’t slow down once they enter into a nucleus after all, only the quarks of an SRC pair do. 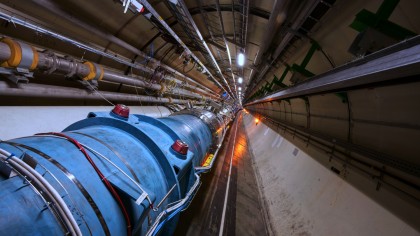 When a pair of nucleons become correlated, the relatively large amount of energy that powers the strong forces of the two nucleons begins to flow between each nucleon’s system of quarks, causing the disruption in their momentum. This disruption appears so pronounced that it skews the data regarding the speed of the quarks in the atomic nucleus overall.

The math that the researchers developed in their research shows that the exchange of energy between a neutron-proton SRC would explain the observed EMC effect, according to Gerald Feldman, who wrote an article in Nature about the published study but who did not take part in the CLAS Collaboration's research.

“The CLAS Collaboration has used electron-scattering data taken at Jefferson Lab to establish a relationship between the size of the EMC effect and the number of neutron-proton SRC pairs in a given nucleus,” Feldman writes.

“A key feature of the work is the extraction of a mathematical function that includes the effect of SRC pairs on the scattering cross-section and that is shown to be independent of the nucleus. This universality provides strong confirmation of the correlation between the EMC effect and neutron-proton SRC pairs.”