How exciting is it for science and rock music to be united in such a unique and defining discovery of a new shrimp species, the Synalpheus pinkfloydi. If you're gifted with the love for rock music and a genuine interest in science then let me treat you to an article packed with those two exciting elements.

A recent discovery of a new shrimp species, the Synalpheus pinkfloydi, from the alpheid genus Synalpheus family was found off the Pacific coast of Panama by British, Brazilian, and American scientists. 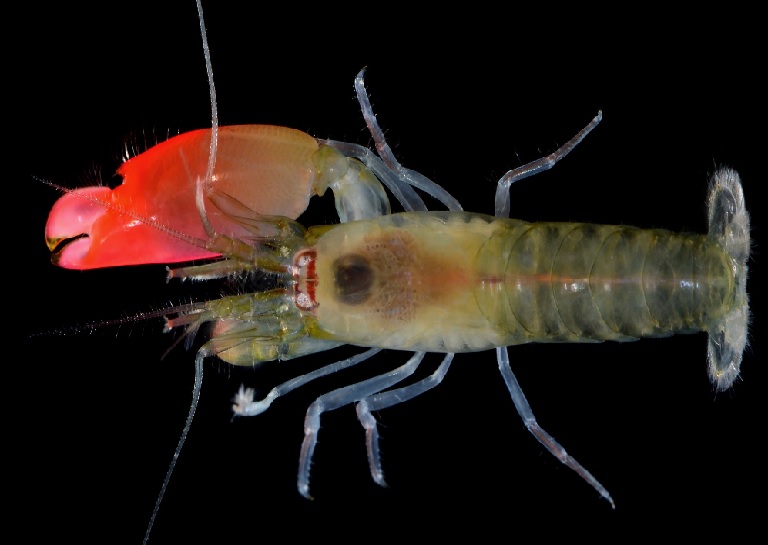 This interesting looking shrimp can scare off, and even kill smaller sea creatures by rapidly snapping its giant claw and producing a sonic blast. It is able to produce such a deafening wave of sound when its enlarged claw closes at a high speed and creates a high-pressure cavitation bubble. When the bubble implodes, it generates a large amount of sonic energy that is considered to be one of the loudest sounds in the ocean.

The blasting bubble is also capable of giving off temperatures of 4,400 degrees Celsius (7,950 degrees Fahrenheit) that can nearly equal the scorching temperature of the Sun's surface. To give you a sense of just how loud the snapping claw of the Synalpheus pinkfloydi is, a rock concert noise only ranges between 120 - 129 decibels and a gunshot or siren (at 100 feet) are in the 140-decibel zone. Amazingly, the Synalpheus pinkfloydi's claw can snap at a whopping level of 210 decibels! 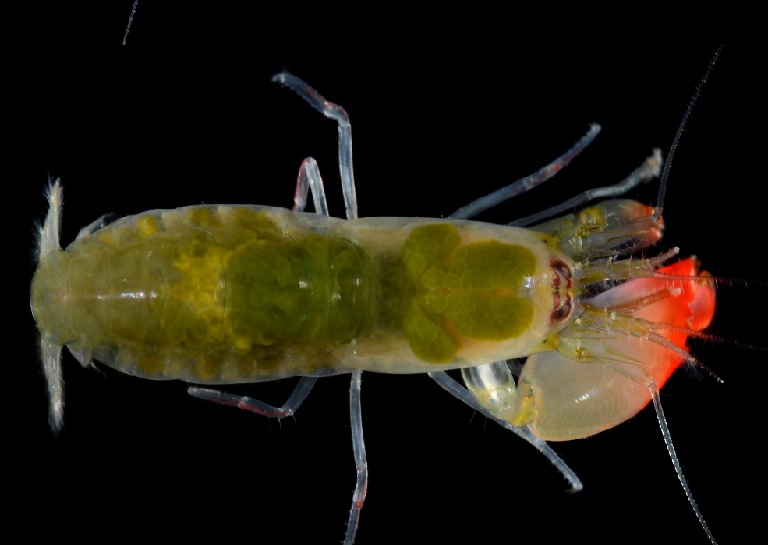 What's the story with the name?

Be honest, if you are a scientist and has the authority to name a newly discovered species, what would you name the creature? For the leading scientist of this 'conspicuously colored species', Dr. Sammy De Grave, the naming process came easily as he turned to his musical inspiration.

"I have been listening to Floyd since The Wall was released in 1979 when I was 14 years old. I've seen them play live several times since, including the Hyde Park reunion gig for Live8 in 2005. The description of this new species of pistol shrimp was the perfect opportunity to finally give a nod to my favorite band", says De Grave.

The study's leading author, Arthur Anker, also expressed his admiration for the legendary rock band. "I often play Pink Floyd as background music while I'm working, but now the band and my work have been happily combined in the scientific literature", explains Anker.

The Synalpheus pinkfloydi is not the only shrimp species with a powerful, enlarged claw. It has a close relative species called Synalpheus antillensis, found in 1909 in the western Atlantic and the Caribbean side of Panama. The scientists, however, find the two species to have significant differentiating genetic codes which allow for the S.pinkfloydi to be considered as a new species and adopt a rock and roll name.

And to celebrate the discovery of the Synalpheus pinkfloydi, here is my personal Pink Floyd favorite - High Hopes. It doesn't make any references to shrimps or any animals though, but the concept of discovery, imagination, paradise and the wonders of youth are packed into this 7 plus minutes of rock symphony.

Published paper is available via Zootaxa

This Beastly F-22 Was Reconstructed After a Take-Off Incident