There might still be hope for the early detection and prevention of volcanic eruptions. Volcano music can help scientists monitor eruptions.

A group of researchers from Instituto Geofisico revealed that they might be able to monitor volcanic eruptions with the help of the music or infrasound recordings from the Cotopaxi Volcano that is present in Central Ecuador. This new study revealed that Cotopaxi produces very unique sounds that scientists could potentially use in order to monitor the volcano and all its hazards.

Facts state that a volcanic eruption in 2015 caused the volcano’s craters to change its shape to a deep cylindrical form. This crater creates sound waves when the forced air reverberates against its walls, causing the volcano to rumble.

The sound resembles that of a pipe organ as pressurized air is forcefully moved through metal pipes.

Jeff Johnson, a Volcanologist at the Boise State University in Idaho who is also the lead author of this study says, “It's the largest organ pipe you've ever come across.” He adds, “Understanding how each volcano speaks is vital to understanding what's going on. Once you realize how a volcano sounds, if there are changes to that sound, that leads us to think there are changes going on in the crater, and that causes us to pay attention."

The new findings reveal that the sounds of the volcano are significantly influenced by the geometry of the volcano’s crater. They deduced that a thorough understanding of the “voiceprint” of each volcano could substantially aid scientists in monitoring these natural hazards in a better way. 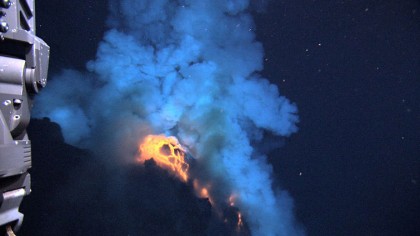 Furthermore, they can also be lifesavers in alerting scientists to all the changes that are happening inside the volcano in addition to signaling any or all impending eruptions. Johnson is of the opinion that the eruption of Kilauea in Hawaii that is still ongoing could be a potential proving ground to study and understand the impact of the sounds of a crater to the changes in its shape.

Listening to the infrasound of Kilauea could help scientists in monitoring the depth of the Magma from afar in addition to being able to forecast all the potential eruption hazards caused by the volcano.

David Fee, a volcanologist at the University of Alaska Fairbanks, who is not associated with this new study says, “It's really important for scientists to know how deep crater is, if the magma level is at the same depth and if it's interacting with the water table, which can create a significant hazard.”

It is interesting to note that Cotopaxi was dormant for the majority of the 20th century, although it erupted a number of times in August 2015. These massive eruptions were predicted to melt the immense snowcap of Cotopaxi, which could even trigger massive mudflows and floods, destroying the nearby towns and cities.

This is when the Ecuadorian researchers noticed the strange sounds coming out of the crater and deduced that these dramatic reverberations that were coming from the volcano could potentially be the ticket to avoiding further eruptions and related hazards.

In Johnson’s own words, "It's like opening a bar door that goes back and forth for a minute and a half. It's a beautiful signal and amazing that the natural world is able to produce this type of oscillation."

Newly Formed Volcanic Islands Might Be "The Cradle of Life"