A team of researchers at Caltech have used nanotechnology methods to produce the world’s smallest version of the Mona Lisa.

The famed and instantly recognizable painting, the "Mona Lisa", now comes in a miniaturized nano-version, thanks to a team of researchers at the California Institute of Technology (Caltech). 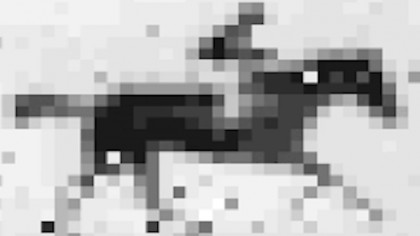 The team used a technique which is informally called DNA origami (the name alone implies an incredibly intricate amount of work), which involves specially programming strands of DNA that will assemble themselves into desired shapes. Using this unique method, they have been able to create the smallest version of Leonardo da Vinci’s portrait that exists in the world, and beyond that, it’s also the largest flat structure ever built using this method. The measurements for the small gem: a staggering 700 nanometers wide.

To make the tiny pixels, researchers first produced double-stranded DNA, the result of smaller units of single DNA strands known as nucleotides’ (A, T, G and C make up the total 4) binding together. Because only certain nucleotides can bond—A nucleotide with a T nucleotide, for instance, designs can be generated. Squares are generated from a long single DNA strand binding with shorter single strands, referred to as staples: when combined, the staples are able to manipulate parts of the longer strand, which produces several desired shapes. From there, molecules can be selectively added by the scientists to create a raised pattern that becomes visible under a microscope. It’s no wonder this process has earned the name of DNA origami!

Details about their work were published in a study, titled “Fractal assembly of micron-scale DNA origami arrays with arbitrary patterns”, that appeared in this month’s Nature journal. Grigory Tikhoromov, senior postdoctoral scholar and lead author, explains the challenges involved in producing the intricate designs using the fractal assembly process:

"We could make each tile with unique edge staples so that they could only bind to certain other tiles and self-assemble into a unique position in the superstructure...but then we would have to have hundreds of unique edges, which would be not only very difficult to design but also extremely expensive to synthesize. We wanted to only use a small number of different edge staples but still get all the tiles in the right places."

The team put together a short video explaining the fractal assembly process:

Not satisfied to merely carry out their own research, the team also developed software that other researchers can use as well: "To make our technique readily accessible to other researchers who are interested in exploring applications using micrometer-scale flat DNA nanostructures, we developed an online software tool that converts the user's desired image to DNA strands and wet-lab protocols," says Caltech Assistant Professor of Bioengineering Lulu Qian. "The protocol can be directly read by a liquid-handling robot to automatically mix the DNA strands together. The DNA nanostructure can be assembled effortlessly."

In making the connection between their study and its impact on future work in the same area, Philip Petersen, Caltech graduate student and paper co-first author said, "Our work gives them an even larger canvas to draw upon."