A group of scientists have proposed geo-engineering glaciers in Greenland and Antarctica as a way to prevent sea level rise caused by climate change.

Scientists have proposed a series of radical engineering projects in Antarctica and Greenland to help stop glaciers melting and entering the oceans.

The suggested ideas include underwater walls, artificial islands and giant pumps that push cold water onto glaciers to assist in stopping them melting.

The group of researcher led by John C. Moore who is the chief scientist at the College of Global Change and Earth System Science, Beijing Normal University, China; and professor of climate change at the Arctic Centre, University of Lapland, Rovaniemi, Finland has outlined their plans in the current issue of Nature.

“We think that geoengineering of glaciers could delay much of Greenland and Antarctic grounded ice from reaching the sea for centuries, buying time to address global warming,” the article reads.

The researchers justify the huge costs involved in the project by outlining the alternatives. “If nothing is done, 0.5–5% of the world’s population will be flooded each year after 21002. For example, a 0.5-metre rise in Guangzhou, China, would displace more than 1 million people; a 2-meter rise would affect more than 2 million.

Without coastal protection, the global cost of damages could reach US$50 trillion a year. Seawalls and flood defenses cost tens of billions of dollars a year to construct and maintain.”

The article lists other recent large-scale water based engineering projects that have come in under the potential costs the damages caused by the climate change may occur. They list Hong Kong’s artificial island built to host the city's new international airport costing $20 billion and China’s Three Gorges Dam, which spans the Yangtze River to control floods and generate power, costing around $33 billion.

“If the world does nothing, ice sheets will keep shrinking and the losses will accelerate."

“Geoengineering of glaciers has received little attention in journals. Most people assume that it is unfeasible and environmentally undesirable. We disagree,” the scientists state. “If the world does nothing, ice sheets will keep shrinking and the losses will accelerate.

Even if greenhouse-gas emissions are slashed, which looks unlikely, it would take decades for the climate to stabilize.” The group proposed three ideas to stimulate discussion on the subject. 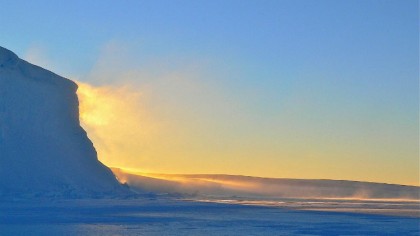 In 2002, 3,200 square kilometers of the Larsen B ice shelf collapsed. It is now just 30% of the size that it was in the 1980’s. In order to stop the further collapse of ice shelves, the authors of the article propose to support them by artificially pinning the ice shelves to the front of the glaciers.

This would be achieved by building berms and islands that extend from the shelves or are built into the sea floor.

The final idea proposed in the article is to freeze subglacial streams that contribute to water runoff and increase the speed of glacial melt. This complex process that involves drilling through deep layers of ice has a projected cost of $500 million USD.

The article ends with a warning that the proposed measure will not halt global warming if greenhouse gas emissions keep rising.

Scientists Used Soda Bread as a Scaffold for Tissue Engineering