A recent study is clarifying the interactions between cannabinoid receptors and immune cells in the brain. The work brings new understanding regarding inflammation and loss of brain cells.

Though humans have been around thousands of years, it is only in our recent history that the twelve systems of the human body, in all their anatomical splendor, were organized into the framework which we all have come to know. With exception to a few surprising anatomical discoveries like the interstitium, or the tiny channels connecting the brain and the skull, our basic understandings of the systems have remained more or less the same. 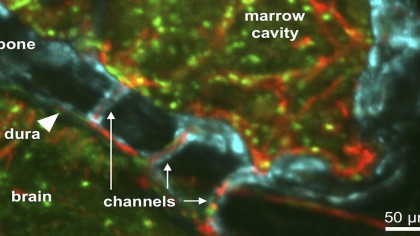 Scientists Uncover Secret Tunnels Between the Brain and Skull

The endocannabinoid system is a good example of one of the scientific discoveries in recent times that shook things up. It wasn't even until the last two decades of the twentieth century that it began to appear on the biological radar. It's essentially a signaling system that consists of receptors and plays a role in regulating hormone secretion and consists of 2 types: CB1 and CB2.

Explaining a complex network interaction in the brain

Researchers at the University of Bonne set out to understand its effect on microglia, the cells that act as the main line of defense in the brain and central nervous system, using lab mice in their experiments. Dr. Andras Bilkei-Gorzo from the Institute of Molecular Psychiatry at the University of Bonn, who was also part of the study, explained the function of the receptors: “These are messenger substances produced by the body that act as a kind of brake signal: They prevent the inflammatory activity of the glial cells.”

They found that it was the neurons that contained CB1 receptors, not the receptors themselves, which was having this effect on the cells.

"...microglial cells have virtually no CB1 and very low level of CB2 receptors. They are therefore deaf on the CB1 ear. And yet they react to the corresponding brake signals - why this is the case, has been puzzling so far," explained Dr. Andras Bilkei-Gorzo from the Institute of Molecular Psychiatry at the University of Bonn.

Aging plays a role in accelerating this process, as the number of these important receptors tends to increase over time. Using lab mice to look at the interaction between the cells and receptors, the researchers discover some interesting facts.

Bilkei-Gorzo added: “Since the neuronal CB1 receptors are no longer sufficiently activated, the glial cells are almost constantly in inflammatory mode. More regulatory neurons die as a result, so the immune response is less regulated and may become free-running.”

Devising a strategy based on new information

Having an understanding of this delicate process will help scientists to determine which anti-inflammatory drugs would be most effective. For instance, Bilkei-Gorzo was also part of a team that looked at the effectiveness of tetrahydrocannabinol (THC) as a treatment for restoring cognitive function, a result they achieved with aging mice.

Though mostly based around experiments with lab mice, research in this area of the human anatomy will continue to yield surprising and beneficial results in the years to come.

Details about the study appear in a paper, titled "Cannabinoid 1 Receptor Signaling on Hippocampal GABAergic Neurons Influences Microglial Activity", which was published on August 28th in the Frontiers in Molecular Neuroscience journal.

Via: University of Bonn