Researchers at the University of Washington and the Massachusetts Institute of Technology have created a 2D magnet that is just one atom thick for the very first time. This breakthrough could radically alter the way we use magnetic materials. Magnetic materials are critical in our day to day technological lives, playing a key role in hard-disk data storage and as part of sensors. 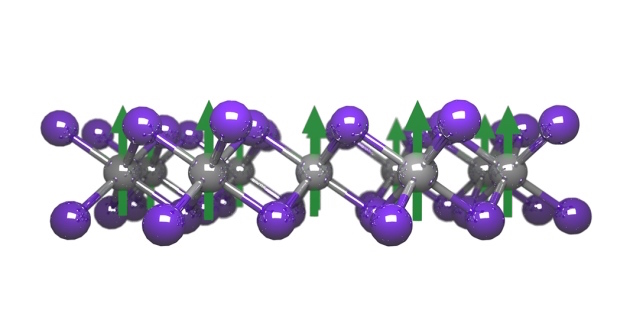 This huge discovery could have massive impacts on the design and power of our handheld devices in the future. Faster and bigger storage and slimmer devices are just some of the other possible applications. The team’s discovery of magnetism in the 2D world of monolayers or materials that are formed by a single atomic layer is published in the journal Nature. The paper goes into detail of how magnetic properties exist even in the 2D realm. Xiaodong Xu, a UW professor of physics and of materials science and engineering, and member of the UW's Clean Energy Institute, explains “"What we have discovered here is an isolated 2D material with intrinsic magnetism, and the magnetism in the system is highly robust," We envision that new information technologies may emerge based on these new 2D magnets." 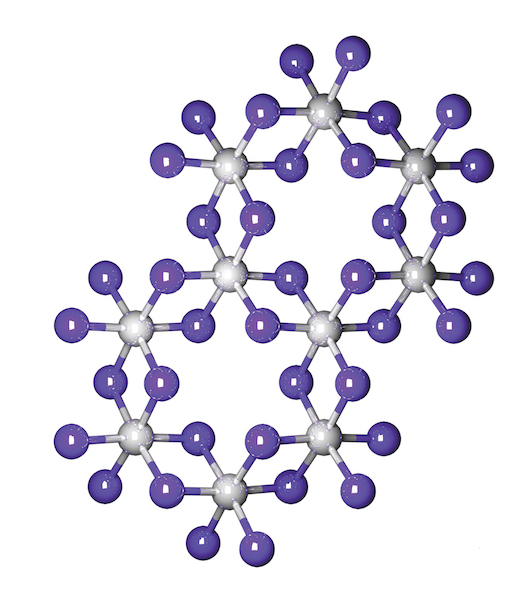 A top-view depiction of a single layer of chromium triiodide. Chromium atoms are depicted in grey, with iodine atoms in purple. [Image Source: Efren Navarro-Moratalla/Nature]

MIT physics professor Pablo Jarillo-Herrero and Xu led the international team of scientists and researchers who proved that the material—chromium triiodide, or CrI3—has magnetic properties in its monolayer form. Work had previously proven that CrI3—in its multilayered, 3D, bulk crystal form—is ferromagnetic. But there had previously been no proof of a magnetic substance when the material had been thinned down to a single atomic sheet. The researchers have also found that materials can display unique properties in their monolayer state not evident in their multilayered, 3D forms.

"You simply cannot accurately predict what the electric, magnetic, physical or chemical properties of a 2D monolayer crystal will be based on the behavior of its 3D bulk counterpart," said co-lead author and UW doctoral student Bevin Huang.

Another use for Scotch tape

Surprisingly, the scientists used Scotch tape to shave a monolayer of CrI3 off the larger, 3D crystal form to discover its properties in its 2D form.

"Using Scotch tape to exfoliate a monolayer from its 3D bulk crystal is surprisingly effective," said co-lead author and UW doctoral student Genevieve Clark. "This simple, low-cost technique was first used to obtain graphene, the 2D form of graphite, and has been used successfully since then with other materials."

The discovery will lead to many other research possibilities. Xu explains, "2D monolayers alone offer exciting opportunities to study the drastic and precise electrical control of magnetic properties, which has been a challenge to realise using their 3D bulk crystals. But an even greater opportunity can arise when you stack monolayers with different physical properties together. There, you can get even more exotic phenomena not seen in the monolayer alone or in the 3D bulk crystal."

Xu and his magnetic team will next examine the magnetic properties unique to the 2D magnet that contains a CrI3 monolayer or bilayer.