The Breakthrough Listen Initiative will start its 'listening' of millions of stars over the next 60 days in attempts to find life outside Earth.

After racking up considerable attention in the media for its premise, the Breakthrough Listen Initiative is ready to start listening to millions of stars in our galaxy. The 60-day survey will be conducted using the CSIRO Parkes Radio Telescope in New South Wales, Australia.

The project also recently got a significant upgrade, as Breakthrough Listen's funding gave the facility multibeam capabilities. This will allow the telescope to listen to more places throughout the sky with 13 beams.

Those 13 beams will allow the Parkes Radio Telescope to survey the nearest 1,000,000 stars, the plane, and the center of our galaxy. It will also span the nearest 100 galaxies to the Milky Way. And, thanks to the public nature of the research, all data will be open to the public as it becomes available.

"...we hope to uncover evidence that our planet, among the hundreds of billions in our Galaxy, is not the only one where intelligent life has arisen."

"With these new capabilities," said Danny Price, Parkes Project Scientist with the Breakthrough Listen project at UC Berkeley, "we are scanning our Galaxy in unprecedented detail. By trawling through these huge datasets for signatures of technological civilizations, we hope to uncover evidence that our planet, among the hundreds of billions in our Galaxy, is not the only one where intelligent life has arisen."

The $100 million Breakthrough Listen program exists to seek out intelligent life beyond Earth. According to the Breakthrough Prize Initiative, "it is by far the most comprehensive, intensive and sensitive search ever undertaken for artificial radio and optical signals."

The multibeam upgrade isn't the only one attracting attention about the survey. The new instrumentation will also allow the Parkes system to transmit information at 130 gigabites per second. That's roughly 1,000 times the bandwidth of the fastest home internet connections. Fast connections mean the systems of observations can handle the 100 petabytes of data it's expected to take on. For comparison, that amount of data is roughly what Facebook stored in 2012.

Breakthrough Listen isn't the only project looking to find other life outside of Earth. There are three other projects of note within the Breakthrough family.

Breakthrough Message is a $1 million competition to create a message that represents Earth and humanity. This challenge encourages both scientists and science-lovers to see humanity as one unified group and also to inspire public discussion about how we see ourselves (and potentially how aliens could see us).

There's also Breakthrough Watch, a multimillion dollar astronomical program that would develop space-based tech that can discover other Earth-like planets and make a "neighborhood." 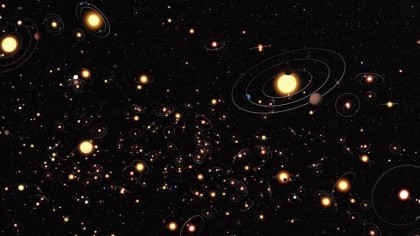 The final (rather large) piece of the Breakthrough series is Breakthrough Starshot. Thus far, the Starshot project has sent up six mini chips called "Sprites" aboard the Venta and Max Valier satellites. The $100 million research and engineering program wants to develop proof of concept for an unmanned space flight to reach 20 percent the speed of light. Ultimately, Starshot wants to accomplish a flyby mission to Alpha Centauri within a generation.

Innovators Yuri and Julia Milner founded the Breakthough Initiatives in 2015.

A Quintillion Lightning Strikes May Have Kick-Started Life on Earth