Teleportation might seem like a process best left to science fiction, but researchers are making fiction into truth. Researchers, for the first time, have successfully teleported a photon from the ground to a satellite in orbit. Teleportation is a  process that can occur when two quantum objects share a wave function. This means that as they come into existence at the exact same place and time, they share the same identity. This continues even when they are separated. No matter where one of them exists whatever happens to it happens to the other as well. 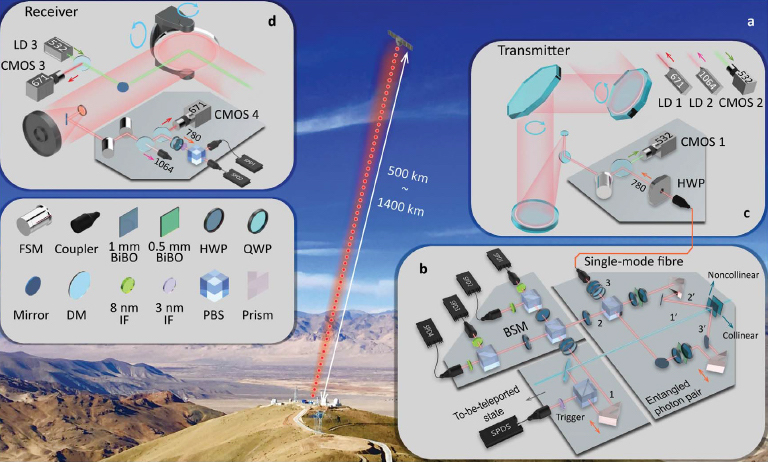 Teleportation of photons in labs, known as quantum teleportation, is pretty common, but the fact that these researchers have been able to achieve this very sensitive maneuver to space is a massive scientific milestone.

The latest breakthrough from scientists had its base when researchers from the University of Science and Technology of China in Shanghai teleported photons 60 miles across the earth, the longest distance recorded at that time. Now the same team has amped up the work by teleporting photons from a ground station in Tibet to a satellite orbiting Earth. This is the first time that an object has been teleported from Earth into space.

The project first needed the satellite as the destination. A research sat, called Micius was launched into a sun-synchronous orbit last year.  The satellite is programmed to pass over the same point on earth every day at the same time. More than just a satellite, Micius is a highly sensitive photon receiver. The researchers then created thousands of entangled pairs of photons and beamed on photon from each pair to the satellite.

The link between the photons means that quantum information can be transmitted from one place to another. Basically, the information from one photon is downloaded in one place and then transmitted over the entangled link to its partner photon in another location. The second photon takes on the identity of the first, but because of the entanglement, it is essentially the first photon. Imagine if twins were actually the same person.

The researchers stated, “Long-distance teleportation has been recognized as a fundamental element in protocols such as large-scale quantum networks and distributed quantum computation.”

In theory the distance of the teleportation is unlimited, but in reality, the photons are very fragile and interact with matter around them, causing the entanglement to be broken.

A step closer to quantum internet

Don’t get confused, no actual physical object has been teleported, and as mentioned before, this procedure is common in labs. But what is special about the latest news is that the precise engineering needed to complete the procedure was accomplished. But this wasn’t just an exercise to see if it was possible. Researchers have their eyes on a much bigger prize, in their own words, it is, “the first ground-to-satellite up-link for faithful and ultra-long-distance quantum teleportation, an essential step toward global-scale quantum internet”.