A lone wolf has left the CEZ prompting scientists to question the impact of affected animals on the wider population.

On April 25, 1986, a routine safety test at the Chernobyl Nuclear Power Plant in Pripyat, Northern Ukraine went horribly wrong. Due to inherent design flaws and poorly executed systems, the test resulted in a steam explosion that then pushed masses of fission products into the atmosphere.

This radioactive material later fell onto other parts of the Western USSR and Europe. The explosion left the area completely devastated and was cordoned off in an area known as the Chernobyl Exclusion Zone or CEZ.

This area is uninhabited except for a small group of residents who refused to leave. Despite reports that the area will continue to be unsafe for humans for at least another 20,000 years, plants and animals have slowly come back to the zone and it is known heavily forested with high animal population levels due to the lack of competition.

It seems those animals are now ready to venture further afield with scientists tracking a lone gray wolf 369 kilometers (229 miles) from its CEZ-based home. The spotting of the wolf raises questions about the risks of gene mutations present in animals affected by the disaster may travel.

But it also could present as a good opportunity for threatened species. "Instead of being an ecological black hole, the Chernobyl Exclusion Zone might actually act as a source of wildlife to help other populations in the region," one of the researchers, Michael Byrne from the University of Missouri at Columbia, told Live Science. "And these findings might not just apply to wolves – it's reasonable to assume similar things are happening with other animals as well."

The wolf was tagged by scientist back in 2015 then released back into the wild where it was observed traveling 369 kilometers out of the zone over a period of 21 days, averaging around 16 kilometers of travel per day. Unfortunately, the GPS collar stopped working before scientists could determine if the wolf returned to the exclusion zone, made their home elsewhere or died whilst on the road.

While wolves traveling far and wide isn’t unusual it is the first time that a wolf tagged inside the CEZ has ventured so far away. Thirteen other wolves were tagged at the same time and none of them left the relative safety of the exclusion zone.

Many species of animals have thrived in the exclusion zone, that is almost entirely free from human impact. Gray wolves (Canis lupus) in particular have enjoyed the peace offered by the zone and scientist estimate that there are seven times the population density of wolves in the exclusion zone as there are in nature reserves outside it.

These growing numbers may have been the reason for the wolf to leave. It isn’t clear if the adventurous wolf had any genetic mutations caused by its life in the radioactive environment and if mutations are present, how this would affect the wider populations of wolves. 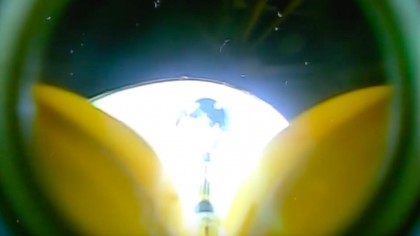 The study concludes that while they have observed just this sole wolf venturing out, it is safe to assume other wolves are doing the same thing. "Considering the high population density of wolves specifically relative to neighboring uncontaminated reserves (up to seven times greater), it is appropriate to speculate that wolves born in the CEZ regularly disperse into surrounding populations," write the researchers.

Scientists will continue to research animal populations in the CEZ and try to understand their impact on the wider environment.

Via: European Journal of Wildlife Research