The previously unknown material, named uakitite, was found in tiny speckles inside the space rock after a microscope examination.

Back in 2016, scientists discovered a uniquely rare quasicrystal in a Russian meteorite that made headlines around the world. Now, gold hunters in the in southern Russia might have accidentally stumbled on another meteorite containing a never-before-seen alien mineral.

A new mineral is discovered

The rare space-borne rubble these foragers stumbled upon came from the Uakit meteorite, named after the location in Siberia where it was found. It was examined by scientists who presented their findings at the Annual Meeting of the Meteoritical Society in Moscow.

The analysis revealed that more than 98% of the meteorite was made of space-formed kamacite, an alloy of iron and 5 to 10% nickel only found in meteorites. "Kamacite is the main mineral of the meteorite (>98 vol.%)," wrote the researchers. 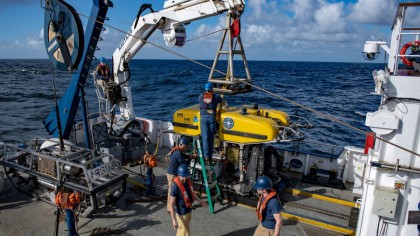 This already indicated the rock must have been forged under conditions of extreme heat as kamacite formation requires temperatures of over 1,273 Kelvin (1,000 Celsius, or 1,832 Fahrenheit). The other 2% of the meteorite consisted of more than a dozen other minerals, most of which are also only known to form in space.

However, hidden inside this piece of space rubble also lay a totally new never-before-seen alien mineral. The previously unknown component was in such small quantities that it was only spotted after a microscope examination.

The tiny speckles were reported to be only 5 micrometers in size. The researchers decided to call their newfound mineral uakitite, after the meteorite in which it was found.

"Unfortunately, we failed to obtain all physical and optical properties of uakitite because of the very small sizes of the grains," explained the researchers. They did, however, determine that uakitite has structural similarities to two other space-forged minerals.

Using this advanced technology, they were able to obtain structural data for three of the uakitite crystals. By fitting this information into to the structural model of chemical compound vanadium nitride, they were able to make some assumptions about the new compound's physical properties.

The mineral is light grey in color featuring a pink tint in reflected light. In addition, it rated an impressive 9-10 on Mohs' scale of mineral hardness, a range based on one mineral's ability to scratch another.

As a reference point, diamond, the hardest mineral known to mankind, measures a 10 on Mohs' scale. This new material is already proving to be exciting but more of it will need to be found, or more advanced technology will need to be invented, before we can learn more about this alien visitor.

For now, it is just nice to know that we have a new little piece of space right in our own home. Welcome to Earth little uakitite!

Via: Annual Meeting of The Meteoritical Society 2018

Meteor Flashes Across the Melbourne Sky at Night

We Can Simulate Instant-Death Cores of Alien Planets

Sailor Pilots Drone Through a Submarine's Narrow Corners with Ease