It seems that with the discovery of ancient cave drawings that Borneo is on the map for more than being a dazzling vacation destination.

Thanks to the growing contributions of archaeologists, it seems that we are unearthing evidence of man's ancient presence on Earth, creating fresh narratives about the past as quickly as developers and industry leaders are constructing a new history with their innovations. Perhaps this is why we are seeing many examples of people of today reviving ancient methods or even rebuilding tools from centuries past.

Now, a group of scientists from Australia and Indonesia is releasing information about the oldest figurative drawings unearthed in any cave in the world. They were discovered in a cave in Borneo on the Indonesian island of Sulawesi, and despite their age, possess a rich range of reddish-orange colors.

To verify their results, the team first took calcium carbonate deposits from one of the larger sections, an animal painting located inside Lubang Jeriji Saléh, a limestone cave in East Kalimantan. They then used the reliable method of uranium-series analysis.

The significance of the findings is two-fold, in that they (1) with supporting evidence that they date back at least 40,000 years, they are the oldest on record recovered by any archaeological team and (2) they refute the long-held idea that the earliest examples exist in Europe.

“It now seems that two early cave art provinces arose at a similar time in remote corners of Palaeolithic Eurasia: one in Europe and one in Indonesia at the opposite end of this ice age world,” said Associate Professor Adam Brumm, a Griffith archaeologist also involved in the study.

The findings help to establish more of a tangible link between the peoples who were part of the ancient and vibrant mix of cultures which occupied Eurasia, which archaeologists and anthropologists have been trying to do for decades. They estimate that a big shift in the cave art aesthetic occurred roughly 20,000 years ago. The whens and hows of when this exchange took place are still not clear, and it may never be.

Still, it seems there are now just as many questions as answers, which any good archaeologist knows is a good thing. The team estimates that current-day Borneo was part of the massive supercontinent of Eurasia.

“The new findings illustrate that the story of how cave art emerged is complex,” explains rock art expert Adhi Agus Oktaviana, who was also part of the expedition. 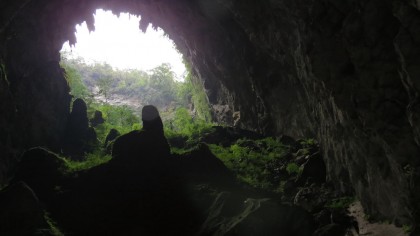 Though there is still much evidence to piece together by the archaeological team, their work is helping to fill in massive gaps of information about the past, and at the same time build a new roadmap of history that will endure for decades to come. Much like the work done on deconstructing--and then reconstructing--the Silk Road, each new piece of evidence is changing our concept of the collective past.

Details about the historic findings appear in an article, titled "Palaeolithic cave art in Borneo", which was published yesterday in the Nature journal.