An international team of scientists and emergency managers are convening in Washington, DC next week to see how well we’d respond to an impending asteroid impact event.

Next week, scientists and emergency managers from around the world are coming to Washington, DC to war game a possible asteroid impact scenario to assess humanity's preparedness for such an event.

Scientists and emergency managers from around the world are coming to Washington, DC next week for the 2019 Planetary Defense Conference where they will participate in the biannual asteroid impact exercise that tests humanity’s response to the discovery of a possible impact event, how well we manage the crisis, and what factors could trip up our response.

RELATED: WHY DID THE METEORS OVER CHELYABINSK AND TUNGUSKA EXPLODE?

The week-long war game puts participants in various roles that would need to be coordinated if we determine an asteroid impact is coming, including “national government,” “space agency,” and other emergency management and scientific advisory roles. During the exercise, the participants do not know how the scenario will play out from day to day, only receiving daily updates about changing conditions or events. It is the job of the participants to react to these updates and coordinate the international response to the impact event.

The exercise is prepared and run by NASA’s Planetary Defense Coordination Office and the US Federal Emergency Management Agency as a way to explore possible countermeasures that could to protect against an asteroid hit, and if an asteroid were to hit us, what our response would need to be. The specific scenario that will be roleplayed was created by NASA’s Jet Propulsion Laboratory (JPL).

Here’s What Participants Will Face Next Week

In case it hasn’t been clear up until now, this exercise is entirely fictional, and while it will adhere as closely to what we believe a real threat would look like, this entire scenario only exists on paper for this exercise.

With that disclaimer, let's dig into what the participants will face next week. The scenario begins with astronomers identifying a previously unknown near-Earth asteroid, designated 2019 PDC, and learning through models and observation that the asteroid has a one percent chance of hitting the Earth during its closest approach on April 29, 2027.

This one percent threshold of an asteroid impact is the generally agreed upon trigger point where the international community would need to begin coordinating their real-life response to the threat, so the determination of the asteroids 1 in 100 chance of hitting the Earth is the point where the exercise itself begins.

Humanity will have eight years to prepare, but little is initially know of the asteroid other than its orbit, its speed (~31,000 mph), and that it is roughly 100 to 300 meters long. Where the asteroid’s orbit intersects ours gives scientists a risk corridor to assess which runs clear across the US, the Atlantic and Pacific Oceans, and Western and Southern Africa.

The potential damage caused by an impact from an asteroid this size is more or less known since other meteor impacts—asteroids technically become meteors once they reach our atmosphere—have occurred, and we have been able to measure their effects of their devastation.

Measuring Up the Practical Asteroid Threat

In 2013, a meteor exploded 12 to 15 miles over the Russian city of Chelyabinsk, blowing out windows miles away and injuring hundreds of people. It is estimated to have been about 60 feet long weighed about 22 million lbs, and its speed upon hitting our atmosphere is thought to have been about 40,000 mph. These three physical characteristics combined to generate 15 to 20 times as much energy as was released by the atomic bomb the US dropped on Hiroshima. Had the meteor hit the ground instead, the consequences would have been catastrophic for the city of Chelyabinsk, and that's just a 60 feet long meteor.

The suspected meteor responsible for the Tunguska event in 1908 was twice the size as the Chelyabinsk meteor, with an estimated diameter of 120 feet. The Tunguska meteor is estimated to have weighed 220 million lbs, and since force increases exponentially relative to an increase in mass, the Tunguska meteor generated almost 200 times the energy released by the Hiroshima bomb. The effects of the detonation were global in scope, though mild compared to other impacts that have occurred in our planet's history.

At 100 meters long at its smallest, though, the fictional 2019 PDC would still be three times the size of the Tunguska meteor which blew up over a relatively uninhabited forest in Siberia. Were 2019 PDC to hit land or water or detonate in the atmosphere, there wouldn’t be much practical difference for humans on the ground: all these scenarios for an impact event would be devastating in different ways, but what would matter would be the enormous release of energy, equivalent to thousands of Hiroshima bombs. That much energy discharged at once would be catastrophic regardless of how or where it is released.

And that's the best case scenario for an impact in this exercise; at 300 meters, there may be the kind of extended nuclear winter that kept people up at night during the Cold War Era. 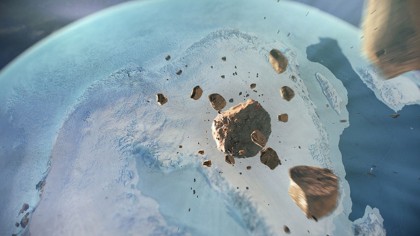 This is the context for the scientists and emergency managers descending on Washington, DC next week and it will be fascinating to see what the smartest, most knowledgeable people we can throw at this problem come back with. The participants will need to consider what are the feasible options for deflecting the asteroid as well as whatever space missions we would need to launch to carry out any deflection plan they develop. They will probably also have to prepare for an impact as well because even at 100 to 1 odds, that is not the kind of gamble humanity wants to walk into unprepared. Plans developed through these conferences will serve as foundational planning documents for an actual response in the real world, should we ever be unlucky enough to have to turn to them.

NASA has also made the results of previous exercises available on their website if you want to know what to expect out of the conference next week. The entire conference will be live-streamed on the European Space Agency's Facebook page and they will also be live-tweeting the event and regularly updating the ESA Rocket Science Blog as plans develop.