An interdisciplinary science team has started a four-year project to develop a robot hand that can sense touch. The project will last 4 years and they have 1.4 million USD to keep the work going.

The world’s first bioengineered hand that can feel touch is in development by scientists from Florida Atlantic University (FAU) and the University of Utah School of Medicine. The researchers are aiming to develop a robotic hand that can adapt to its environment. A multi-disciplinary team will take on the task that could revolutionize the future of prosthetics. The team of scientists is being led by researchers from the College of Engineering and Computer Science out of FAU who have secured a $1.3 million grant to fund the research.

Prosthetics have improved in giant leaps and bounds in the last decade, from being weighty and clunky additions that often slowed rather than assisted to their user, to robot hands that can be controlled with our brains. However, even the most sophisticated prosthetic can be difficult for the user to get used to and control because of the lack of feeling. Without a tactile experience of closing a hand around an object, users must rely on visuals which are unintuitive. The team is developing a method of linking the robot's tactile touch sensations to the user's brain. The development includes research into how brain neurons and human behavior are linked. The outcomes of these findings will assist the scientists to start to create a robot that can allow its user to feel touch.

The scientists already have a big boost in their project by being able to work with a record-breaking robotic hand developed by the BioRobotics Laboratory in FAU’s College of Engineering and Computer Science. This incredible piece of robotics engineering can already do so much more than an average prosthetic. It has the ability to understand pressure changes and can interpret information from different materials and objects it interacts with. Like a human hand, the robot hand has many sensory receptors that help it adjust its grip according to the weight and texture of objects. 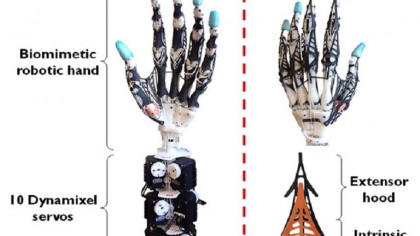 The project aims to take this robot hand's ability to pick up this information and figure out a way to send it to the user's brain to be received in the same way we do with our regular skin. The scientists need to understand how to replace the neural pathways in a person’s body who has had their extremities damaged or lost through trauma.

Research can have a broad application

Erik Engeberg, Ph.D., principal investigator, an associate professor in FAU’s Department of Ocean and Mechanical Engineering, and director of FAU’s BioRobotics Laboratory explains saying: “When the peripheral nerve is cut or damaged, it uses the rich electrical activity that tactile receptors create to restore itself. We want to examine how the fingertip sensors can help damaged or severed nerves regenerate. To accomplish this, we are going to directly connect these living nerves in vitro and then electrically stimulate them on a daily basis with sensors from the robotic hand to see how the nerves grow and regenerate while the hand is operated by limb-absent people.” The team has funding for the next four years. The final research will not only be of use to patients who have lost limbs to people who have suffered a loss of functionality on their arms and hands due to paralysis or stroke.