These robotic bees perform the tasks left undone due to dwindling bee populations. Is this the start of nature-independent farming?

Most of the world’s produce comes thanks to insects like bees, which help by pollinating the flowers and plants we all rely on. However, in recent years, large colonies of bees have been disappearing in what has been called Colony Collapse Disorder (CCD).

Entomologists suspect many factors are causing the collapse, including poor nutrient supply and harmful pesticides.

According to the US Bee Informed Partnership, the country's beekeepers lost around a third of their colonies. As both natural population and reared bee colony population decline, the farmers who depend on these bees face issues with their yield. This, in turn, increases food prices.

To cater to this problem, researchers at Tomsk Polytechnic University Russia have proposed a fleet of robot-bee prototypes.

According to Alexey Yakovlev, head of TPU School of Engineering, these robot bees are suitable for use in greenhouses only, which is not the natural habitat of conventional bumblebees. These robot bees can work incessantly, even in spring when bumblebees are not productive.

"We plan to develop the robo-bees, algorithms, and software, as well as optical systems and image recognition methods for accurate positioning,” Yakovlev told Russia Beyond. The cost of developing the first batch of these flying robo-bees will be around $1.4 million.

These artificial bees will be most beneficial for strawberries and other plants that grow in greenhouses. 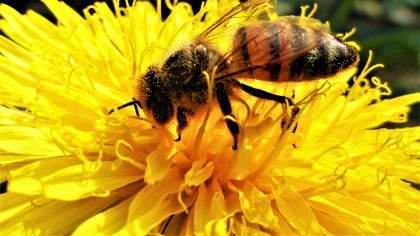 Another group of researchers at the National Institute of Advanced Industrial Science and Technology, Japan, have developed drones that help in the cross-pollination of trees. Eijiro Miyako and his colleagues mimicked the bees' ability to cross-pollinate and devised a drone that hauls pollen among the flowers.

The team is working on making the drone autonomous by gearing it with GPS and AI to land correctly on the flowers and not damage them.

The drone-style robo-bees developed by Miyako and the team have horsehair coated with a gel, bounded in their bellies, which sticks pollen to it without damaging the pistils of the flowers. In their experiments with Japanese lilies, the drones were able to cross-pollinate them.

Some, however, consider these techniques inefficient. Saul Cunningham of Australian National University, Canberra says that using drones to pollinate hundreds of thousands of acres of farms will not be economically feasible.

On such a large scale, the drone costs would rise exponentially. Cunningham believes that it is better to pursue the strategy to tackle CCD and aim to improve bee management.

But don't despair yet. Researchers at Harvard who were also influenced by bees  created a robot bee that is a tenth of the size of drones, using developments in pop-up microelectromechanical (MEM) technology.

The robots consist a brain, body, and colony. Sensors mimic the eyes of a smart AI, which is the brain of the robot bee.

All these different robot bee developments, however, are in their prototype stage. They are not ready for the scale of pollination overtook by natural pollinators.

There is still much more research needed to use robot bees as a viable alternative. The idea, however, holds impressive promise and is bound to spur even more robo-bee creators.