Vattenfall has installed an 8.8 MW wind turbine off the coast of Scotland.

Swedish energy company Vattenfall has installed an 8.8-megawatt capacity offshore wind turbine at the European Offshore Wind Deployment Center (EOWDC) off the coast of Scotland. A single rotation of the turbine dubbed the ‘world most powerful’ can reportedly power an average UK home for a day.

Vattenfall says they plan to add another mega turbine to the site, sourced from the company Vestas. The EOWDC will be used as a site to test 11 other powerful turbines.

The test site was almost derailed by Donald Trump who contested the proposed wind farm site would visually disturb a planned golf course in the area. At the time of the battle over land and sea rights, the Trump organization said the wind turbine test site “will completely destroy the bucolic Aberdeen Bay.”

Trump was defeated in the UK supreme court in 2015. Once the site is totally up and running, it will annually produce 312 GWh, enough to power nearly 80,000 homes in the area. The site at full capacity has the potential to meet 23 percent of Aberdeen’s total electricity demand.

It will displace 134,128 metric tons of carbon dioxide. Swedish owned Vattenfall has a goal to excise fossil fuels from its portfolio within one generation.

“The EOWDC, through its innovative approach to cost reduction and pioneering technologies, leads the industry drive toward generating clean and competitive wind energy power — one that will reinforce Scotland’s global energy status,” said Gunnar Groebler of Vattenfall's wind unit. The plant is partially funded by the European Union which gave about €40 million (about $49.3 million USD) to the project.

MHI Vestas Chief Operations Officer, Flemming Ougaard, said, “We are very pleased to have installed the first of 11 turbines at Aberdeen Bay. Our collaboration with Vattenfall not only provides clean wind energy for the UK, but also is an important opportunity for us to gain valuable experience with several different technologies. We look forward to the successful installation of the remaining turbines.” 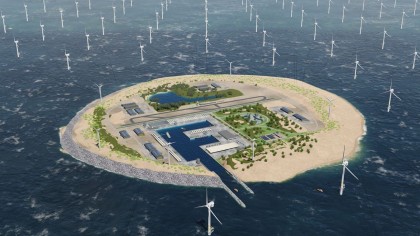 The EOWDC plays an important role in this energy sector by pushing ahead with new technologies. The latest powerful wind turbine uses a suction bucket jacket to connect the turbine to the ocean floor.

These jackets allow installation of the footing to be faster and quieter and also make the decommission process easier and more efficient. The first of the 11 foundations was positioned installed on Sunday 25th March 2018.