The move is part of the firm's parent company Iberdola's plans to become carbon neutral by 2050 and will also see a £5.2 billion investment made in the UK's clean energy sector.

With climate change looming over us, the last few years have seen quite an increase in initiatives to divest from fossil fuels and focus instead on environmentally friendly renewables.

Last year, Scotland made headlines when it pledged to reach 100% renewable sustainability for energy production by 2020. Now, ScottishPower has officially become the first energy giant worldwide to go 100% green with the sale of its last remaining gas plant.

“This is a pivotal shift for ScottishPower as we realize a long-term ambition. We are leaving carbon generation behind for a renewable future powered by cheaper green energy," said in a statement Keith Anderson, Chief Executive of Scottish Power.

The company will now generate all of its electricity exclusively from wind power. "We have closed coal, sold gas and built enough wind to power 1.2 million homes," added Anderson.

But that is not all. ScottishPower is also investing £5.2 billion in a 4-year plan targeting a pipeline of renewables and smart grids that will more than double the UK's existing 2GW clean energy capacity. 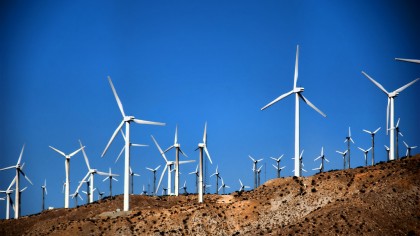 “Every working day we are investing over £4m to deliver cleaner, smarter power for customers. From today we can focus solely on making energy generation cheaper, cutting carbon quicker, building smart grids and connecting customers to renewable electric future for transportation and heating," explained Anderson.

Currently, Scottish Power has an impressive pipeline of 2,900 MW In offshore wind alone in the UK, beyond the 714 MW under construction at its East Anglia ONE site. The company also hopes to secure additional development areas in the next round of offshore wind leases throughout the UK.

The deals are part of parent company Iberdrola’s €3 billion global asset rotation plan designed to support a commitment to one day becoming carbon-free. The Spanish energy titan has made very ambitious promises when it comes to global carbon emissions reductions, showcasing its firm dedication to protecting the environment.

“Energy companies must be part of the solution to climate change.  Iberdrola is acting now to cut carbon emissions 30% by 2020 and be carbon neutral by 2050.  The sale of these generation assets is consistent with our strategy," said Ignacio Galán, Chairman and Chief Executive of Iberdrola.