Scrobby cleans your solar panels so you don't have to

So you've installed some solar panels up on your roof and they're due a clean. Keeping your solar panels clean is essential for their efficiency and sadly you can't rely on the odd downpour to clean them off. But here to save you from dangerous climbs is Scrobby, the autonomous, solar-powered robot. 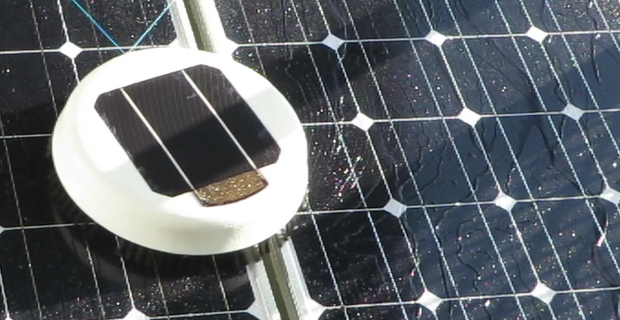 Scrobby is fully autonomous meaning that after installing and setting it up, it will automatically go ahead and clean your solar panels to schedule. It's also quite eco friendly being solar powered itself, it also uses rainwater to wash the panels with its brush.

This self-sufficiency is also rather attractive to potential buyers as it means it doesn't require any recharging at the mains or topping up with water, so the owner can just leave it to itself. The 1.2kg, 23cm diametered robot comes in white as it results in the lowest internal temperature to prolong its life-time. It can take care of panels at a maximum of 10 x 20 meters and at a maximum incline angle of 75 degrees.

They have aimed to produce Scrobby at a low enough price so that the owner earns their investment back with the savings of being fully autonomous and powered through free renewable resources. The companies website claims that, "For an average house mounted system this will take just about 2,5 to 3 years to earn back its initial investment."

Is it really needed? Well, according to the company tests show that tests 'indicate losses from a mere 3% per year to all the way up to 40% each year in areas near agriculture or industry.'

The default settings result in three full cleans per year but Scrobby can also be controlled over Bluetooth if you want to change the schedule.

They've now turned to Kickstarter to help raise the funds to get the product onto market and you can pre-order one for as low as €269.