Miyake is responsible for a small but mighty addition to our cities.

Living with vision loss or impairment can be extremely challenging. Today's animated Google Doodle pays tribute to a designer who helped make the life for those with vision loss just a little bit easier. Thanks to Japanese designer Seiichi Miyake tactile paving is ubiquitous across the world.

Way back in 1965, Seiichi Miyake spent his own money to try and come up with an invention that would help a friend who was suffering vision loss move through the city ore easily.

He came up with the idea of tactile blocks or Tenji blocks as they were first known. You will have seen these at crosswalks all over the world, small raised blocks on pavements that alert people with low vision or blindness of imminent danger and also safety.

Miyake designed the blocks in two ways, the dotted blocks alert visually the impaired that they are approaching danger. This type is most commonly found on the edge of pavement and railway platforms.

A block with a barred pattern alerts the pedestrian that they are following a safe path. Pedestrians can recognize these blocks and their patterns by ‘reading’ them with either their vision cane, their feet or with the help of a vision assistance animal.

Adopted around the world

His block designs were first adopted by the city of Okayama on March 18, 1967, next to a school for the blind. In the 1970s the blocks were installed across all Japanese railway stations.

Since their invention, the tactile blocks have had a few changes including a pattern with smaller raised dots or more pill-shaped bumps signifying different directional cues around the world. For example, when the dots are raised lines in the direction of movement it might mean steps head. For those without vision loss, the blocks may simply blend into the urban environment but they play a critical role in giving more independence to those with a disability.

However, the bumpy tiles have their critics too. Some argue that instead of adding tactile paving to city streets, there should be other things done to assist the visually impaired such as generally improving the quality of pavement surfaces. 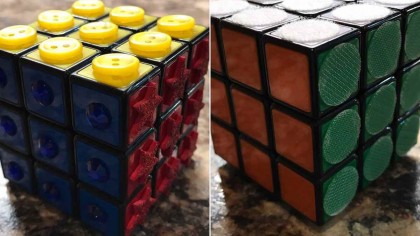 Others also suggest the bumps might do more harm than good to those with mobility difficulties such as the elderly who may trip on the uneven surface. Moving forward into a world that is more accessible to people with disability, cities are turning to designers who have vision impairment themselves.

Australian architect Chris Downey suddenly went blind in 2008 following the removal of a brain tumor. He is now a passionate advocate and activist for cities to think about how they are navigated by people with vision or mobility issues.

He says cities will thrive when they offer a seamless navigation experience for all, no matter ability. “Disability and blindness cuts across ethnic, social, racial and economic lines,” he said.

“Disability is an equal opportunity provider and everyone is welcome.” One positive action towards a more inclusive city is the addition of tactile street nameplates with Braille characters. Other initiatives include audio instructions at traffic lights and single level access from street to buildings.